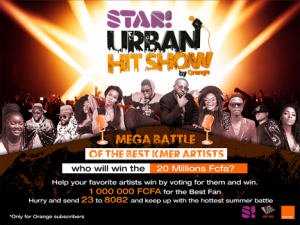 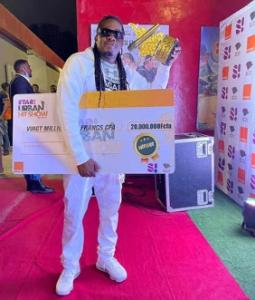 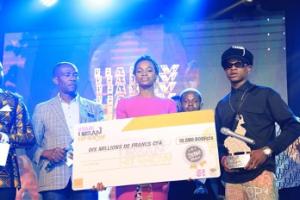 Happy on the Right Presented with his Prize 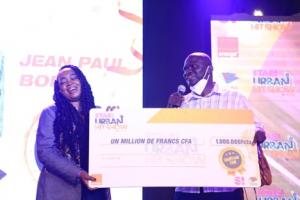 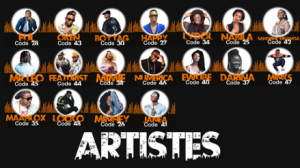 We are extremely excited to have introduced this new concept of mobile entertainment and fan engagement in such an innovative way in Cameroon.”
— Diane Mouaha, Country Manager for StarNews for Central Africa

LOS ANGELES, CALIFORNIA, CAMEROON, October 12, 2021 /EINPresswire.com/ — StarNews Mobile, the leading mobile video network helping content creators, celebrities, and brands monetize their content in Africa, wrapped up its first season of StarNews Urban Hit Show in partnership with Orange in Cameroon with a nationally televised awards show that took place October 8th, 2021. Winners were announced on live TV Canal 2. The show reached an incredible 280,000 subscribers signing up to the service in only 10 weeks!

Season one, which ran from June 21st to September 18th, featured Cameroon’s top 20 urban artists who battled weekly on the StarNews platform. Fans voted for the best performers with their mobile phones but only three walked away with a prize. The first-place winner, Maahlox, won 20 million FCFA (about $40k). With his winnings, he announced he is starting a charity and plans to distribute the money to families in need.

Happy claimed second place, taking home an amazing 10 million FCFA (about $20K), and Minks came in third place, claiming 5 million FCFA ($10k). These winnings are huge considering that the average yearly income in Cameroon is less than $1000 and most artists, though talented, struggle to make a living.

The StarNews Urban Hit Show (SNUHS), modeled after American hits like The Voice and America’s Got Talent, is the first-ever musical battle competition through a mobile platform in Africa. Available to fans strictly on their mobile devices and with a small fee for voting, it provides a fun streaming experience and allows masses of people, primarily the youth who are passionate about their artists, to be engaged and entertained. As a result, it has drawn a huge audience of almost 300,000 voters (more than 3% of the mobile network) to sign up in only a few weeks.

Artists compete weekly amongst each other by creating songs to unique themes. When they subscribe to the campaign, fans receive daily backstage clips featuring their favorite artists and the weekly battles that can only be streamed through the StarNews platform. Similar to the voting portion of shows like American Idol and The Voice, StarNews Mobile subscribers and fans are encouraged to support their favorite artists by voting for them daily, but with a compelling twist: the top voter, “The Best Fan” also receives a cash prize of 1 million FCFA (about $2k).

“We are extremely excited to have introduced this new concept of mobile entertainment and fan engagement in such an innovative way in Cameroon,” said Diane Mouaha, Country Manager for StarNews for Central Africa. “As StarNews Mobile’s services become more accessible across Africa and provide a one-of-kind yet affordable streaming experience to people, we believe consumption of local content over mobile in Africa will take off in a massive way, and we are already seeing it in so many markets.”

Given the success of this first season, Season Two is already in the making and will feature emerging artists who will battle it out for another amazing cash prize and a highly coveted music deal from one of our partners. Stay tuned.

About Orange
Orange is one of the world’s leading telecommunications operators with sales of 42.3 billion euros in 2020 and 142,000 employees worldwide on 31 December 2020, including 82,000 employees in France. The Group has a total customer base of 259 million customers worldwide as of 31 December 2020, including 214 million mobile customers and 22 million fixed broadband customers. The Group is present in 26 countries. Orange is also a leading provider of global IT and telecommunication services to multinational companies, under the brand Orange Business Services. In December 2019, the Group presented its new "Engage 2025" strategic plan, which, guided by social and environmental accountability, aims to reinvent its operator model. While accelerating in growth areas and placing data and AI at the heart of its innovation model, the Group will be an attractive and responsible employer, adapted to emerging professions.

About StarNews Mobile
StarNews Mobile is a network of mobile video channels that allows celebrities and brands to monetize their fan bases in Africa, the world’s fastest-growing mobile market. StarNews Mobile works with popular local and international stars in Africa to create exclusive and addictive short videos that fans are eager to pay for. StarNews has managed to build strong distribution and marketing partnerships with pan-African mobile operators (such as MTN, Orange, and Moov), and strategic relationships with big entertainment giants like Universal Music, Sony as well as hundreds of local African creators.