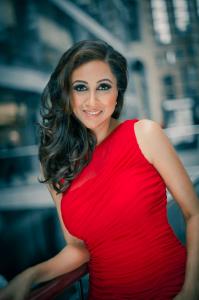 Raw with Rasha gives a voice to those who may feel alone and isolated in the Indian American community. This is familiar territory for Rasha. When her 12-year marriage to an Indian man ended in divorce, she was shunned by her community. The loneliness and emotional conflict that followed were devastating. She decided to do something about it.

Rasha states: “When you address what’s really going on behind the scenes, you get to the root of the pain, unveiling the core issue that helps us understand each other and heal as a community.”

About Rasha Goel:
Rasha Goel is a Host and Producer who has worked with Sony Pictures, Warner Bros., HBO Asia, CNN, and Dick Clark Productions, among others. Rasha has been a speaker at the renowned World Communication Forum in Davos, Switzerland, and is a member of the Television Academy and Hollywood Critics Association. She has been nominated for two Emmys.

Rasha’s mission is to give a voice to the voiceless, “I want people to feel, to be vulnerable, and to be free – and that can only happen through a candid conversation.”