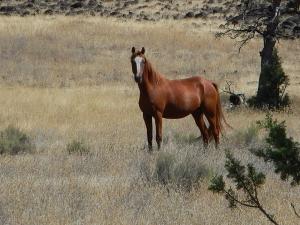 Return To Freedom was a key supporter of the incidious Path Forward plan, which included massive roundups! 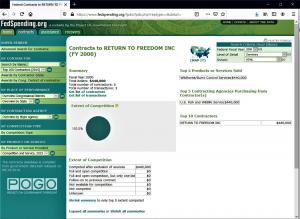 A record of a $440,000.00 contract awarded to Return To Freedom for Wild Horse and Burro Control 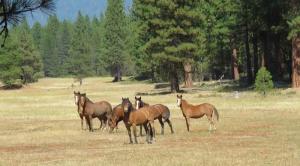 A family of wild horses that lives in a remote forest have symbiotically grazed-in a fire-break, which is protecting a forest of champion old-growth conifirs against catastrophic wildfire. This is their evolutionary role as keystone herbivores. 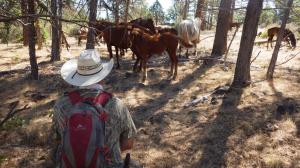 In what seems to be an effort to attempt to rebuild credibility in wild horse circles, Return To Freedom condemns roundups while supporting drugging wild horses

Do Americans want wild horses to be 'wild and free'? Or managed via draconian roundups and manipulated via selective breeding using drugs? My money is on 'wild & free!”
— William E. Simpson II – Naturalist

YREKA, CALIFORNIA, UNITED STATES, October 11, 2021 /EINPresswire.com/ — Recently in the news, the non-profit organization ‘Return To Freedom’ seems to be trying to distance themselves from their wrong-headed insistence and support for the so-called wild horse management plan called ‘The Path Forward For Management Of BLM’s Wild Horses & Burros’; also known simply as the ‘Path Forward’ (See Images).

However, that ship has sailed and it's no surprise that the disaster stemming from the ‘Path Forward is well underway.

The name ‘Return To Freedom’, sounds great. But it’s a name that seems more like an oxymoron given that the organization using that name supported the 'Path Forward', and it seems that in the past, Return To Freedom was paid to roundup wild horses, resulting in their removal from freedom and shoved into confinement (See Images).

Many genuine wild horse experts and advocates condemned Return To Freedom's support of the 'Path Forward' requesting that Return To Freedom discontinue its support of that *proposed (*at that time) plan in writing via certified mail on September 16, 2019, as evidenced in this 2019 article: https://tuesdayshorse.wordpress.com/2019/10/14/american-wild-horses-set-on-path-to-extinction/

Now two years later, in recent press releases, Neda DeMayo the president of Return to Freedom has returned onto the media scene, condemning the roundups that were part of the insidious ‘Path Forward’ plan that her organization helped to implement. (SEE Images).

American wild horses are teetering on the brink of extinction and they cannot endure any further meddling and blunders by people or organizations who via their actions and posits over decades, have demonstrated that they do not possess the knowledge that is required to posit the sustainable conservation of wild horses in a natural state as intended under law.

And adding insult to injury, Ms. DeMayo, amazingly continues to support of the highly-flawed drugging of wild horses with chemicals as a form of contraception on wild horses, which are in fact native species wildlife. Arguably, this is an example of having less than the requisite scope of knowledge that would allow the realization of more intelligent options for the sustainable, natural conservation of wild horses in America.

In concert with some wild horse non-profit organizations and activists such as American Wild Horse Campaign and Return To Freedom, the Bureau of Land Management (‘BLM’) is also engaged in the selective breeding of native species American wild horses via the use of PZP and GonaCon, thereby meddling with natural evolutionary processes that are critical for the long-term survival of wild horses.

When a human decides which animals get to breed and/or which do not, that is by definition, ‘Selective Breeding’.

Selective breeding is contrary to the intent of the Wild Free-Roaming Horses and Burros Act (WFRHBA).

Selective breeding of wild horses by humans disintermediates the evolutionary process of ‘Natural Selection’, which is critical to the continued survival and genetic vigor of wild horses. It is an essential evolutionary process in any co-evolved predator-prey relationship. This is why it is flawed management to maintain wild horse populations that are commingled with livestock populations in Herd Areas that have been made devoid of apex predators.

Depleted predator populations are great for livestock production, but terrible for wild horses, which require and depend upon their co-evolved predators for their genetic vigor via evolutionary Natural Selection.

Regardless of any ‘good intentions’ by some wild horse non-profit organizations and activists, supporting or doing the wrong things to wild horses is harmful and inexcusable.

According to Friends of Animals and lawyer Michael Harris:
https://friendsofanimals.org/news/foas-victory-forces-epa-to-consider-new-pzp-research/

"Information is now available to the EPA regarding the unintended—and previously undisclosed—side effects on both targeted mares and wild horses in general. It not only shows unreasonable adverse effects, but also indicates the use of PZP on wild horses likely violates the Wild Horse and Burro Act of 1971.
“We fully believe the research is legitimate, and therefore the use of PZP on wild horses is likely illegal under the Federal Insecticide, Fungicide, and Rodenticide Act (FIFRA) ; per Michael Harris."

Excuses that posit the use of chemical contraception (PZP and GonaCon) on native species American wild horses as the ‘best solution’ for overpopulation are examples of a poor understanding of evolutionary science. And this ignorance is driving the irreversible damage that is being done to the remaining populations of American wild horses.

Egregiously, these highly-flawed management tactics are being used by the BLM and non-profit organizations while concurrently there exists a superior paradigm for managing wild horses naturally and allowing them to remain truly ‘wild and free’.

That ‘superior paradigm’ allows rewilding American wild horses to resume their longstanding evolutionary roles in the wilderness as keystone herbivores in wilderness areas where such rewilding is both ecologically and economically appropriate, which balances ecosystems and, according to the best available science, helps to reduce both the intensity and frequency of wildfires via symbiotic reductions of prodigious annual grass and brush.

An article at GrazeLIFE explains this novel paradigm in greater detail: https://grazelife.com/blog/wild-horse-fire-brigade-lessons-in-rebalancing-north-american-ecosystems-by-rewilding-equids/

The use of chemicals to control wild horse populations (wildlife) disintermediates evolutionary Natural Selection and leads to genetic erosion and social disruptions in wild horses (equids). Furthermore, using chemicals (PZP & GonaCon) offers no genuine long-term sustainable benefits for either side of the wild horse management debate. [2]

Aside from the social breakdown of family bands, genetic erosion and selective breeding that are all part of using PZP on free-roaming native species American wild horses, we find:

"Even on a large animal struck correctly, the dart (contraceptive PZP and GonaCon darts) can cause hemorrhage and hematoma. Misplaced shots can break bones or even kill the animal” (Thomas and Marburger 1964). Report–Muzzle report can cause problems in darting either captive or free-ranging animals. In captive situations, the noise can be more disturbing to animals than getting struck with a dart. Disturbed animals are then more difficult to approach, or the entire group of animals may run away" ~ Page 32; Overview of Delivery Systems for the Administration of Contraceptive to Wildlife”, by Terry J. Kreeger

Stalking and shooting wild horses with powerful gas-powered firearms is in itself a 'harassment' of wild horses and is an arguable violation of both the intent and codified specifications of the 1971 Wild Free Roaming Wild Horse and Burro Protection Act.

Based-on Terry J. Keeger's study, by promoting the use of PZP and using PZP on American wild horses, non-profit organizations who support PZP, are arguably using donation funds to encourage harming wild horses in violation of the intent of very Act that seeks to protect them.

People should think very carefully about supporting or donating money to any non-profit organization that supports the use of chemicals as contraception on wild horses.

Gray ME and Cameron EZ. (2010). Does contraceptive treatment in wildlife result in side effects? A review of quantitative and anecdotal evidence. [“Two main impacts of immunocontraception have been proposed; 1) genetic resistance could evolve, similar to the response seen to other biological control agents (Magiafoglou et al. 2003), and 2) immunocontraceptives could be selecting for immuno-compromised individuals since those treated females that do breed have a lower immune response to the contraceptive (Nettles 1997, Cooper & Herbert 2001).”] Reproduction 139, 45-55. Online publication date: 1-Jan-2010. Retrieved at http://www.reproduction-online.org/content/139/1/45.full

5. 'Can Wild Horses Help Prevent Wildfires in the West?'
https://horse-canada.com/magazine/equine-welfare/can-wild-horses-help-prevent-wildfires-west/

Wildfire continues to devastate the American West. The evolutionary role of the wild horse is at the center of a genuine solution