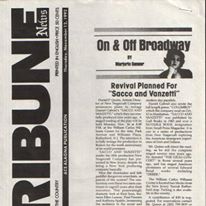 Christopher Columbus monument in Washington Park was a gift of Newark's Italian community in 1925. It was a bronze statue of Columbus on a tall square base adorned with four bronze relief plaques depicting the commissioning, embarkation, voyage, and landing of Columbus. Each corner of the base, between the reliefs, is adorned with a standing female figure representing discovery by Rome artist: Ciochetti, Giuseppe. In 2021, Columbus is no longer atop this Ciochetti artwork. Disembowled almost a century later.

Phonetically, Nevarca, was a Southern Italian contraction for their New Ark in America. Antonio Caruso (my great-Grandfather) arrived in the 1880’s
and became a grocer in the 1st Ward on 8th Ave (now Central Ward). His wife’s maiden name was Tuosto. They all attended St Lucy’s Church and their 9 children worked in the grocery store to help the family earn a living.

In 1925-27, the Giuseppe Verdi Society of Newark commissioned a Columbus statue for Washington Park on Broad St. Those statues demonstrated their commitment to Newark and America. Americans also embraced Tenor Enrico Caruso (1873-1921) who bridged opera nd popular music to become one of the best selling recording artists of all time. Italians repressed their language in America. My Mother was scolded by her Grandfather to never speak Italian outside their house. They all struggled to learn English. It was considered anathema to speak Italian in public. They also also saluted Columbus at that time based in part to the popular Columbus World’s Fair exhibitions

The Italian immigrant Italians suffered deportations and discrimination. In part this came out of the 1912, 1913 and 1919 labor strikes in Paterson, and Lowell Massachusetts. Deportations began the FBI career of 24 year old J Edgar Hoover. The Red Scare was begun after the Russian Revolution in 1917-20. Labor activists like the Irish native Elizabeth Gurley Flynn spoke at the American Labor Museum Botto House during the 1913 Paterson strike. Russian émigré Emma Goldman was also active in the pursuit of workers rights and a living wage. She was later deported back to Russia.

They became a media sensation of the radical left and the hard rock conservatives in Boston. They endured 2 infamous trials. They were convicted of “consciousness of guilt” and executed by electric chair in 1927.

While in Italy, the other elephant was Mussolini (1883-1945) who rose to power in 1922 . COLUMBUS was a manifestation of anti-fascism in Newark in that period. 11 immigrants were lynched in New Orleans. Yet, the Italians remained here as Italy devolved into Fascism.

They also also saluted Columbus at that time based in part to the popular Columbus World’s Fair exhibitions which marked their identity as Americans in a foreign land. The Statue of Liberty greeted these refugees in New York Harbor and at Ellis Island from their impoverished life in Southern Italy. Caruso and Verdi’s music still shine as legends in Italian culture and every opera house in the world.

The Newark Sunday Call published a striking photo of my Caruso Family in 1925. The Irish journalist referred to them as a “clan” which is an endearing Irish expression foreign to gli Italiani (the Italians). As an Irish-Italian and now a bridge between both cultures. When asked if I was “Irish” at LaScala, and later when directing Tom Murphy’s Irish play The Gigli Concert in Italian in Rome.

As an Irish-Italian I am a bridge between both cultures especially when asked if I was “Irish” at LaScala. Later I made my European debut directing Tom Murphy’s Irish play The Gigli Concert in Italian in Rome. Frustrated, after my Master’s Degree at The American University in Washington, DC, I studied Italian. While at LaScala in Milan I began my rediscovery of my complicated Irish-Italian roots here and in Italy.