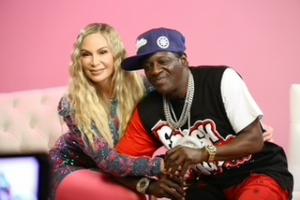 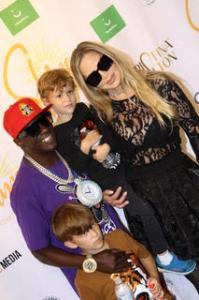 Christina Fulton, her grandkids, & Flavor Flav at the red-carpet premier of SHINE

LOS ANGELES, CA, UNITED STATES, September 16, 2021 /EINPresswire.com/ — Launch Media, a live streaming platform, is proud to welcome actress and TV personality Christina Fulton brand new show, Shine, produced by, Glitter and Gold Media, LLC and Launch. Fulton's inspirational, motivating, and fun show interviews the most incredible people from around the globe that are making a difference in the world today. For the first episode, Host and Actress Christina Fulton, was joined by special guest, American rapper and TV personality Flavor Flav, and put some sparkle back into TV talk shows. Launch media will be airing all 8 episodes of the first season weekly starting, September 10, 2021 until October 29th. Roku will also make episodes available.

Executive Producer Crystal Wortman says, “we really need to focus on the good of people and how they are making difference in the world”, Christina captures this in each episode”.

WATCH THE TRAILER FOR SHINE: https://www.youtube.com/watch?app=desktop&v=pUy8tvxQa_0&feature=youtu.be

“After the difficult past year, the world really needs some happiness and healing,” says Launch founder and CEO Brian Stollery. “Christina inspires and motivates, and her energy and uplifting vibe could not be more aligned with Launch’s commitment to providing entertainment that truly elevates humanity. Shine makes you feel like we all matter, and we can’t wait to share this with the world.”

The first episode with Flavor Flav is just the tip of the iceberg. The event went extremely well and is already capturing plenty of buzz from the media. The show kicked off with a red-carpet premiere at the famous Charlie Chaplin Theater, Raleigh Studios on September 9th. Super supporters like, Hello Mind, Honey Bubbles, Mental Health Resilience foundation donated to the special night.

Christina Fulton's and Nicolas Cage's grandkids were also in attendance: Lucian Coppola Cage and Sorin Coppola Cage, the next generation of the Coppola dynasty. Flavor Flav talked about how he came to the realization of how important education is and now wants to go back and get his GED and supporting Literacy in America. Fulton will also make a guest appearance on Flavor Flav's podcast, The Flavor Flav Show on Friday September 24th.

Future guests will include Academy Award Winner Nick Valelonga and internet sensation & YouTube star, Marlin Ramsey Chan, to name a few. Each episode, “hero up” and “peptalk”, the audience with heartfelt stories. Featuring celebrity guest, individual and everyday people. You will laugh, cry and get goosebumps, all the while learning the history and insight to how guests really got to their dreams.

Season Two, is already in the works and will be coming to Roku and all streaming platforms in Spring 2022.

Christina said, “This past year has been very tough for everyone around the globe. We're dealing with a lot in the world of mental wellness and now seems like the best time to get shiny and start polishing up our brains, along with our hearts and souls.” “This show is an incredible opportunity to focus on the positive contributions both, big and small, that people around the world have been making this past year and continue to make, in the effort to leave a positive imprint on the world. I want people to walk away from this show with education on people they don't know. We must remember that there's a lot of people out there in the world that are doing great things and they need to be thanked and acknowledged.”

Christina Fulton is the CEO, founder, inventor, and skin expert of Christina Fulton by Immortal Beauty, Inc., a technologically advanced premium luxury skincare line. Fulton, is the matriarch of the Nicolas Cage family, and the mother of Weston Coppola Cage. Fulton has appeared in over 16 feature films, actress, has worked with Hollywood giants such as Oliver Stone, Brian De Palma, Francis Ford Coppola. Christina has written and hosted 58 episodes of a previous talk show, Playing It Forward.

Currently, Fulton is co-founder of the Mental Health Resilience foundation, http://www.mentalhealthresilience.org, which paved the way for her understanding of the global needs. In health and wellness, Christina has been keeping America fit, healthy, and inspired as a certified motivational fitness expert for over 25 years.