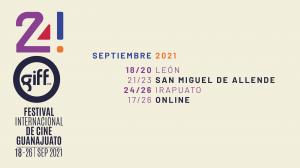 GUANAJUATO, MEXICO, September 16, 2021 /EINPresswire.com/ — The Guanajuato International Film Festival (GIFF #GIFF24) is an established, much anticipated tradition. The 24th edition of the festival kicks off Friday, September 17, 2021, in three host cities in Guanajuato state: San Miguel de Allende, León, and Irapuato. Screenings will continue until September 26. This is Mexico's largest film festival and one of the most important platforms for emerging filmmakers in Latin America.

Presented in collaboration with Medienboard Berlin Brandenburg and the Goethe Institute, this prestigious festival is an opportunity for filmmakers, as well as Mexican and German producers, to develop their projects. This year’s GIFF received 3,274 films from 132 countries that will be screened over the course of 10 days. For a preview of some of the entries, and to meet the filmmakers, visit https://vimeo.com/showcase/giff2021filmmakers

For 2021, the festival, which is dedicated to its co-founder Ernesto Herrera, will have a hybrid format. Respecting health protocols, the festival returns to cinemas and theaters but will maintain its streaming platform and online transmissions. There will be performances of the participating films in theaters, but the digital option is also available with online showings. Live events will have strict sanitary procedures in place.

Over the years, GIFF has established itself as one of the most important platforms for young filmmakers in Latin America, each year bringing emerging talents together with world-renowned experts of the moving image.

The solidification of the festival at the international level is underscored by the fact that a total of 3,274 films from 132 countries responded to the call for entries. As an international competition, GIFF is the largest in Mexico. Films compete in a variety of categories that include Short Fiction, Short Animation, Short Experimental, Short Documentary, Long Documentary and Narrative Feature. In addition, there are a wide range of workshops and conferences plus Women in Film and Television luncheons and National Tributes to both Mexican and International A-list filmmakers who are in attendance.

The festival is made possible each year in large part thanks to the State Government of Guanajuato, the Guanajuato State Secretary of Tourism (SECTUR) through the Guanajuato Film Commission (CFGTO), The National Council for Culture and Arts (CONACULTA) the Mexican Institute of Cinematography (IMCINE), and sponsorship from the private sector, many partnering institutions and hundreds of volunteers.

Guanajuato, located in central Mexico, has all the facilities for easy access by air or land. With a wide range of accommodations, fantastic gastronomy, and—most important of all—a welcoming atmosphere. Without exception, tourists visiting Guanajuato during the Film Festival will receive star treatment.

For its twenty-fourth edition, the Guanajuato International Film Festival opens with the firm vocation of resurgence and reconnection with all members of the film community in Mexico and the world. For more information, visit https://comisionfilmgto.com/