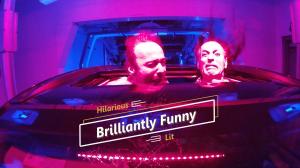 New Jersey Comedy Series about to make a Big Splash

TOMS RIVER, NEW JERSEY, USA, September 15, 2021 /EINPresswire.com/ — Filmmakers Frank Modica and Janet Cutugno creators of The Gilbert Diaries TV Series are bringing back comedy you usually only see on classic black and white reruns .In absence of the Golden Age Comedy which still holds up today but not being made anymore, Frank Modica wanted to reignite the form with modern day twists.

Being a fan of The Marx Brothers, Abbot and Costello, The HoneyMooners, and The Three Stooges, Frank took those comedy concepts and combined them with today's modern comedy into this series.

This series “The Gilbert Diaries” captures that feeling again of good clean comedy both verbally and visually funny for any age group.

The main Character “Gilbert Ferrari”, through his diary writes about all the funny and strange events that happen to him and still happen to him on a recurring basis.

Frank had the opportunity to appear on successful productions, such as Fox TV's Gotham, as well as The Irishman, by Martin Scorsese.

Following his performance in "The Fated," he became a member of the Screen Actors Guild.
Frank is passionate about storytelling, and bringing characters through life with his commitment to acting and performing.