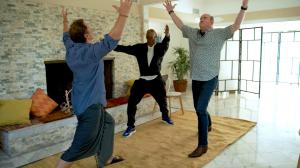 (LtoR) From writer/director Ivo Raza’s ‘Reboot Camp,’ David Lipper as Gordon St. Pierre in a cleansing exercise with Ja Rule and David Koechner, as themselves. 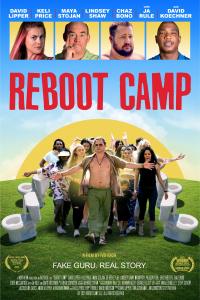 The ‘Reboot Camp’ NFTs include exclusive materials that did not make it into the final cut of the film.

We are excited to partner with Mogul to launch the NFTs in this unique collection of digital artworks. The NFT and Cryptocurrency World will also be the setting for the upcoming 'Reboot Camp' sequel.”
— said David Lipper, producer of 'Reboot Camp'

The production team behind the award-winning comedy 'Reboot Camp' has partnered with Mogul Productions, a global non-fungible token (NFT) marketplace and decentralized finance (DeFi) platform for film and entertainment, for a major NFT drop scheduled for September 16, 2021.

The NFTs being auctioned include a series of never-before-seen NFTs made from deleted scenes from 'Reboot Camp' featuring David Lipper, Jessica Belkin, Nicole Aniston, Chaz Bono, Ja Rule, and David Koechner. In addition to the digitally signed collectibles, 25 digitally signed NFT movie posters will be minted, each including a personalized screener of the movie customized by the lead actor/producer David Lipper and writer/director Ivo Raza.

The “NFT Bonanza” will include 11 one-of-a-kind NFTs and the auction winners will also receive tickets to attend the VIP Invite-only red-carpet screening of 'Reboot Camp', and a meet-and-greet with the filmmakers and stars of the movie.

The star-studded event will take place at the famous Cinelounge® Outdoors at 1625 N. Las Palmas Ave. in Hollywood, on Tuesday, Sept. 21 at 6:00 p.m. PDT. The NFT buyers plus a guest will be introduced to cast for pictures on the red carpet, autographs, and the chance to mingle at an exclusive afterparty with a guest list of less than 150 people. It will be a fan’s ultimate Instagrammable experience! The event will also be streamed live to a global audience on Mogul Productions’ YouTube channel.

About Reboot Camp
Reboot Camp is a multi-award-winning independent film/mockumentary about a fake guru whose sham self-help group becomes a success and turns into a cult. It premiered at the 2020 Austin Film Festival where it won the audience award for best comedy and went on to win several other Comedy Awards on the Film Festival Circuit. The film was written and directed by Ivo Raza. It was produced by David Lipper under his Northern Productions banner, along with Tina Sutakanat, Jim Johnston, with Co-Producers Keli Price, David Roberson, and Kipp Tribble, and Executive Producers Tim Alek and Steve Gentry.

'Reboot Camp' was released in May 2021 and is currently available on all major platforms including Amazon, iTunes, Fandango, MIcrosoft, Goggle, Vudu, and YouTube.

About Mogul Productions
Mogul Productions is revolutionizing film financing through decentralized finance (DeFi), allowing a global audience of film fans to directly participate in the movies and entertainment industry. It’s a platform for film fans, by film fans, empowering users to take an active role in the script-to-screen process. www.mogulproductions.com

Additional photos, the poster image, clips, and interviews are available upon request.
LOS ANGELES BASED PHOTOGRAPHERS,VIDEOGRAPHERS, AND EVENT JOURNALISTS ARE INVITED TO COVER ARRIVALS AT THE SEPTEMBER 21 EVENT. PLEASE RSVP TO: