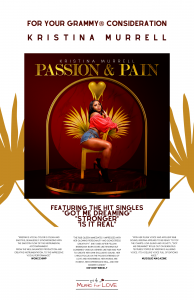 For Your Grammy Consideration 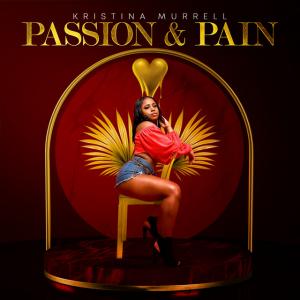 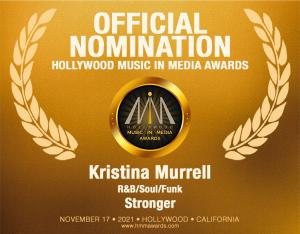 Passion & Pain The Album by Kristina Murrell has received a HMMA nomination and is seeking its first Grammy® Nomination!”
— Music For Love

GREENSBORO, NORTH CAROLINA, UNITED STATES, September 11, 2021 /EINPresswire.com/ — Kristina has been featured in hundreds of magazines and blogs across the world, held the #1 spot on Chicago hip hop and r&b radio for 2 consecutive weeks, reached #1 on the iTunes R&B Soul charts and #4 on the pop charts in Barbados her home country. Kristina reached the top 40 on the DJ download charts receiving a Hollywood Music in Media Nomination for her song “Stronger” and won the bronze medal at the Global Music Awards on her debut release! Kristina’s album “Passion & Pain” is seeking its first Grammy® Nomination in the progressive R&B category, her songs “Stronger” in the Tradition R&B category and “Halfway” in the R&B performance category.
Kristina returns to the limelight, this time with her latest track ‘Let Me Drive’ — a track that oozes an undeniable aura of feminine strength. It’s a smooth and sensual Pop/R&B track, adorned with plenty of 90s nostalgia, but with a modern flair and extremely tight production, courtesy of Sonny King (Music By King INC, King Of Sound Studios). Vanity Wyze also features on the track, adding an unmistakable flow and energy that has become synonymous with his own sound.

“Let Me Drive is about a woman who isn't afraid to take control and say what she feels and wants. The song is sexy, full of energy and perfect for the clubs.”
(Kristina Murrell)

Let Me Drive premiered September 3rd 2021 and is available to stream across all major platforms.

Kristina Murrell is a R&B recording artist whose debut album released Valentines Day of this year. The Bridgetown (Barbados) born singer has always had a natural affinity for music. After moving to the United States at the age of fifteen to pursue her education, Kristina recognized her musical potential whilst taking a choir class.

Not long after, American record producer and songwriter Sonny King discovered Kristina’s natural talent during an audition for the Record Label and Charity organization Music For Love. Once the connection was made, Kristina Murrell began working with Sonny at his recording studio in Greensboro, NC. After signing a production deal with Music By King Inc., the young artist landed a record deal with Music For Love.
Although she receives creative inspiration from a number of artists such as fellow Barbados born superstar Rihanna, Kristina Murrell combines a variety of stylistic elements to form her unique sound. In addition to her musical pursuits, Kristina has a successful modeling career and studies business in college. With over eighteen thousand five hundred followers on Instagram alone, there is no denying the fact that Kristina Murrell has already cultivated a dedicated following prior to her debut release.

For media inquiries, including interviews and all things press-related, please email sonny@musicforlove.org