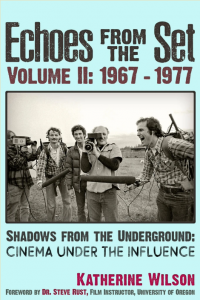 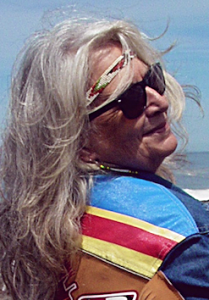 WALTERVILLE, OR, USA, September 10, 2021 /EINPresswire.com/ — "Echoes from The Set, Volume II: 1967-1977 (Shadows from The Underground: Cinema Under the Influence)" is the second volume of Katherine Wilson’s monograph as a screenwriter and filmmaker based in Oregon. Her personal experiences shine light on the New Hollywood, when, according to Wikipedia, “a new generation of young filmmakers came to prominence in the United States … and influenced the types of film produced, their production and marketing, and the way major studios approached film-making.” (The book is available at TrineDay and elsewhere.)

Ms. Wilson examines who and what influenced the New Hollywood – people and forces such as Poetic Cinema Filmmakers, the Merry Pranksters and their film crew, members of the Beat Generation, icons like Jung, Plato and Yeats, and the time's literary theory deconstructionists who heralded a new consciousness emerging from the word with a new bicultural voice announcing itself as coming from a new age, or Aeon.

The 1960’s Generation, not having a language to express this new consciousness emerging in the terrible aftermath of the Age of Reason, turned to cinematic images, archetypes, symbols, and music to create a “structure of feeling” (as literary theorist Raymond Williams coined the phrase) that created a counterculture to the Platonic cave-like shadows from the underground, the mainstream political dialectics of racism, war economies, patriarchal sexuality, gender binaries, and resource extractions. This counterculture greatly influenced cinema worldwide and still influences it today.

Katherine Wilson started as a poetic cinema filmmaker at the University of Oregon with the Merry Pranksters in 1969, then became Hollywood’s “backlot” location scout and location casting director for many years for such notable films as National Lampoon’s Animal House and Stand by Me. Appointed by two Governors to positions which guided Oregon’s Motion Picture Production, including as a liaison to the set of One Flew Over the Cuckoo’s Nest, Katherine realized that screenplay writing and mentoring young filmmakers was what she had been always working towards and returned to the University of Oregon to realize that dream, currently as a Graham Graduate Fellow.