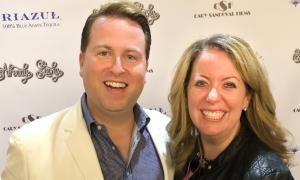 We wanted to provide an open and safe professional opportunity to anyone in the filmmaking industry who has a disability.”
— Nicole Sandoval, CFSIFF Co-Founder

The CFSIFF was created by co-founders Cary and Nicole Sandoval to raise awareness for disabilities. With ongoing discussions and movements dedicated to inclusivity and diversity, it was important to the duo to create an artistic space to ensure the voices, talent, and work of filmmakers with disabilities and films about disabilities would be heard. “We wanted to provide an open and safe professional opportunity to anyone in the filmmaking industry who has a disability,” explains Nicole. “I want to share their story or share a story about a disability that they feel passionate about. It’s important to me to provide a spotlight on disabilities as I was diagnosed with multiple sclerosis in March 2014. Since then, it has been an evolution, mentally and physically, with how this disease affects me and my family and how I can share a positive forum for others who have special abilities like me with a wider audience.” The film festival has been warmly received with entries pouring in from around the world. “We’ve had a tremendous response so far with entries coming from not only the United States but also, Japan, Ireland, Spain, the UK, Middle East and China. We’ve also received submissions from major industry powerhouses like Magnolia Pictures.” says Cary.

CFSIFF is still accepting admissions through the month of August via Film Freeway. Filmmakers with disabilities of any kind and filmmakers with films about disabilities are eligible to submit. The festival is open to all genres and types of films including feature length and short narratives and documentaries and animated features and shorts. The festival will also feature Q & A sessions with industry professionals, filmmaker networking opportunities and opening and closing night festivities. CFSIFF hopes the inaugural year will serve to inspire and incite filmmakers with disabilities to continue to create and expand their artistic expression without limits! Nicole concludes, “I hope attendees will feel the excitement in a new forum with unlimited opportunities to share and grow their talents year after year!”

For more information, visit the Champion Film Salon International Film Festival at www.cfsiff.com. To submit to the festival, visit www.filmfreeway.com/CFSIFF.

CFSIFF is sponsored by Hyatt Regency Frisco-Dallas, Pappas Delta Blues Smokehouse. CFSIFF is proud to work in partnership with To Be Like Me, National Multiple Sclerosis Society and Beautiful Lives Project.