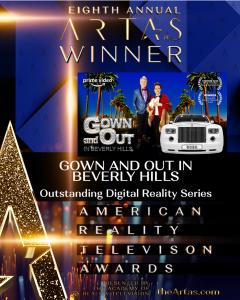 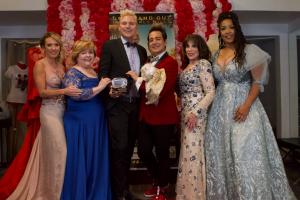 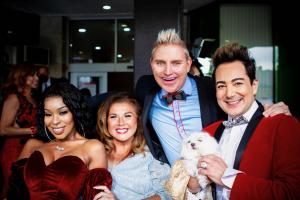 GOWN and OUT IN BEVERLY HILLS (Amazon Prime Video) wins the award for Outstanding Digital Reality Series by the American Reality Television Awards 2021.

I have ONE word for Pol’ Atteu…FABULOUS! Just like the dress he created for me in 2 Hours on Gown and Out in Beverly Hills. We Had Oodles of fun filming and Sophia just adores SnowWhite90210!”
— Farrah Abraham- Celebrity / Actress

With the awards show going virtual this year, all the nominees had to submit an award acceptance video, so the the show stars and creators, Patrik Simpson and Pol’ Atteu, spoofed other virtual award shows and created an iconic video acceptance featuring a number of movie, television and reality stars.

GOWN and OUT IN BEVERLY HILLS takes you into the secret lives, excitement, magic and beauty of Hollywood’s most glamorous celebrities as they prepare for their Red-Carpet debuts with the show’s creators and stars, celebrity fashion designers, Pol Atteu’, Patrik Simpson and lil PAWSonality, SnowWhite90210!

Season 2 takes the show out of the flagship boutique of Beverly Hills, into a new direction, with a look into the personal lives of the show stars', Pol’ Atteu and Patrik Simpson, along with their pup SnowWhite90210. Even more exciting than ever with controversial guest, Farrah Abraham (MTV’S: Teen Mom), soap stars EMMY-Winner Patrika Darbo (Days of Our Lives), EMMY-nominated Kate Linder (Young and the Restless), Bollywood star Neetu Chandra, transgender pop-art artist Sham Ibrahim, Disney star, Ava Kolker, and the boys filmed with Scheana Shay on her podcast "Scheananigans" from Bravo’s Vanderpump Rules!

An exciting two-part episode deals with the homophobic hate-crime and attack against one of the show’s hosts, Pol’ Atteu, which made worldwide headline news after he was brutally attacked backstage during fashion week at one of his prestigious fashion shows. Also featured in season two is the clothing launch and collaboration of Ava by Pol’ Atteu with Disney star, Ava Kolker. The clothing line is now available at Walmart.com.

“We took on the difficult task of featuring the real-life attack of Pol’ Atteu into Season two. Our show is a lighthearted comedy, so to include this vey traumatic incident into the episode, was quite challenging and a delicate dance. It was important to us to keep the integrity and concept intact while still giving viewers a behind the scenes glimpse into the world of fashion and celebrity. Says show Executive Producer and star, Patrik Simpson.

Here is what celebrities are saying about Pol' Atteu, Patrik Simpson and Gown and Out in Beverly Hills:

“Beverly Hills and all the glitz brought to you by Pol and Patrik! Andy, are you listening? They need to be the first gay couple on Real Housewives.”

“My favorite obsession is Gown and out in Beverly Hills, I love this show! Pol and Patrik are funny and compassionate. I want them as my BFF’s!”
-Kym Whitley-

“I am so grateful to work with a genius like Pol Atteu and Patrik Simpson to have developed a very beautiful and unique fashion line. Had the best time at the fashion show with all my friends, and I am so excited to be in Walmart, and I am confident the best is yet to come.”

"Pol & Patrik really shine in this brand-new season of Gown & Out, bringing us juicy storylines wrapped in colorful guests and couture. Fun watch and full of surprises, it continues being a guilty pleasure, often sneaking up on you with some very real issues that hit home. This new installment is very much like a box of assorted chocolates made of fashion & pop culture, where each episode packs a surprise flavor, and you might just not resist and go through all of them at once"

“Pol’ Atteu and Patrik Simpson are Fabulous both on and off the screen and it shows in Gown and Out in Beverly Hills. They open up their boutique and their hearts to their celebrity friends and I am sure America will fall in love with these two queens and their Princess SnowWhite90210 as they get some of our favorite celebrities ready for their big red-carpet reveals!

“Every woman wants to be dressed by them. Hell, everyone wants to BE them! Pol and Patrik’s ‘Gown and Out in Bev. Hills’ is equal parts fab, flash and fun! Interestingly enough, that’s also the recipe for every one of their signature red carpet creations. Coincidence? I think not!”

The most free-spirited, fun loving couple I have ever met. Wherever they go, there is always joy and laughter.

Season 1 and 2 streams on Amazon Prime Video in the USA, UK, Germany and Japan.

Reality Stars, Pol’ Atteu and Patrik Simpson accept their Outstanding Digital Reality Series Award for Gown and Out and Beverly Hills from ARTAS