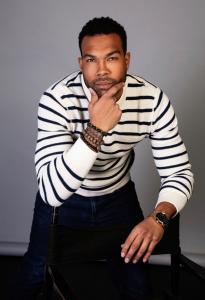 The hour long event will be hosted by Fox SOUL TV’s Claudia Jordan and with a celebrity panel who will speak on how to bring justice to BIPOC communities.

The world is dealing with pain and we have to work together to avoid self destruction.”
— Kinyumba Mutakabbir

MIAMI BEACH, FL, UNITED STATES, May 11, 2021 /EINPresswire.com/ — Hollywood’s new leading man, Kinyumba Mutakabbir, (has over 30 film and television credits and worked with Queen Latifah, Robert Downey Jr, Vivica Fox) is releasing an 11-minute short film documentary on the one-year anniversary of Floyd's death. Nguvu Kwa Watu, or Power to the People, is a film about the protests from unwarranted murders of BIPOC, the lack of progress in the justice system, and strides the community must make for the advancement of BIPOC in America. This film is not about capitalizing on black trauma and rehashing old wounds, but is more of a guide to a path to move forward.

He says, "Our country is dealing with deep rooted pain and we have far too long been conditioned to accept institutional injustices as a normality.  It is time to establish a new normal and work together to avoid self destruction. I urge anyone and everyone to watch this film and end this vicious cycle. There is no better time than now to see our fellow citizens not as combatants, but rather as extended family; through a lens of love and collaborative support, working together as a community and as a people."

The premiere of the film will be on Tuesday May 25th at 9pm EST/ 6 pm PST.  It will be an hour long event hosted by Fox SOUL TV’s own Claudia Jordan and will have a celebrity panel who will speak on injustices and their opinions on how to make the necessary changes to bring justice to BIPOC communities.

With this film and event, Kinyumba aims to bring more awareness to programs that focus on transformative and restorative justice. These are the programs that are among other things diverting juveniles from the penal system, offering counseling and coaching, and establishing educational centers for released convicts. For Kinyumba, the communities of color have been ravished by the justice system and it is his aim to make significant changes in the near future. A portion of all proceeds of the film will go to these non-profit organizations.

Kinyumba also has a passion and expertise in mental wellness and transformational coaching. A life long Martial Artist who grew up in the streets of South Jamaica Queens, Kinyumba launched his own coaching company Moments of Alignment, where he regularly teaches practices of Reiki, NLP (Neuro Linguistic Programming), and Qigong. With these practices, he can help reduce stress, PTSD, and rebuild self love. These practices teach students how to become in -tune with the alignment of their body, mind, and spirit. It is Kinyumba’s belief that “once we begin to love ourselves and each other, we won’t have to fight as much for love from those who do not”.