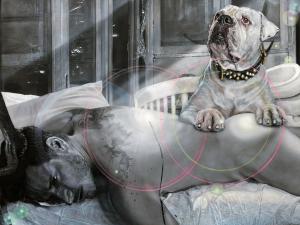 I like to work with imaginary situations, objects and scenarios, inspired or intrigued by current affairs, pop culture and life, while giving them a cinematic twist.”
— István Nyári

LONDON, UNITED KINGDOM, April 15, 2021 /EINPresswire.com/ — David Kovats Gallery is delighted to announce the opening of its second solo exhibition dedicated to the Hungarian artist István Nyári, as part of the gallery’s summer exhibition programme. The exhibition will open to the public on May 5th at the gallery’s main location, 80 Long Acre in Covent Garden.

István Nyári is one of the most prolific figures of Hungarian hyperrealism who has developed an international career and he is based between Budapest and Amsterdam. Always approaching painting with the attitude of a film director, István seeks to place realistic characters into fictitious scenarios in his art that could happen in real life but due to their grotesque, surreal nature, never do. Frequently employing a vivid colour palette, István’s hyperrealist artworks, predominantly acrylic on canvas, account for exceptional technical mastery about which he is questioned often, though he much prefers to discuss the concept behind them, believing that valuable art is beyond technical aspects.

The show brings together 7 large scale works, vividly coloured paintings, confronted by carefully staged, hyperrealist compositions crowded with kaleidoscopic detail. In his works, István sometimes addresses weighty questions with satirical wit and humour, while more often he draws on familiar characters of popular culture, reimagining them in playful, daring and outright shocking ways. István follows contemporary politics and culture while he prefers to cover universally translatable matters of popular culture that people from all walks of life can relate to. This is the artist’s first solo exhibition in the UK.

Among István’s favoured and exercised art forms is portraiture — of close friends, family and himself. In contrast to his treatment of other themes, these offer a gentler, more affectionate and intimate atmosphere, demonstrated by the 2010 painting, My Son Benjamin — The Lord of the Rings, which was exhibited at London’s National Portrait Gallery. Still, many of his portraits feature unexpected or grotesque twists — a sly balancing act between meticulously-crafted reality and fantasy.

According to the artist “truly valuable art is distinguished by its ability to bring imaginary subjects to life that can only exist because of the painter’s creativity and mastery. “I like to work with imaginary situations, objects and scenarios, inspired or intrigued by current affairs, pop culture and life, while giving them a cinematic twist”, he adds.

This exhibition is the first out of the three summer solo exhibitions presented at the gallery space, highlighting the work of emerging and established Hungarian artists such as Gábor Király and Bazil Duliskovich, introducing their work to London’s arts scene for the first time.