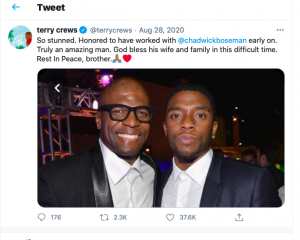 Terry Crews expressed an emotional tribute to the late Chadwick Boseman during the first ever global, interactive, 24-hour charity event on social media.

Chadwick was an amazing person. We worked together during his very first film and he always gave his all, he knew his craft and just had so much enthusiasm!”
— Terry Crews

LOS ANGELES, CALIFORNIA, USA, February 25, 2021 /EINPresswire.com/ — Los Angeles, California – On Sunday actor, activist and former NFL athlete, Terry Crews gave praise to Chadwick Boseman for being such a gentle spirit and an inspiration to all during an emotional tribute at a Clubhouse TV Network (CHTV) fundraiser.

Many celebrities expressed their shock and grief after hearing news of Chadwick’s death, including Terry Crews. In a tweet, he wrote, “So stunned. Honored to have worked with @chadwickboseman early on. Truly an amazing man. God bless his wife and family in this difficult time. Rest In Peace, brother. "So, when the Clubhouse TV Network reached out to him to present the Black History Month Tribute to Chadwick Boseman, Crews didn’t hesitate.

Crews inspired a virtual audience from Sweden, Argentina, Finland, London and the United States during Clubhouse TV Network’s Global Giving COVID-19 Relief fundraiser on Sunday, February 21st. The virtual event was dedicated to the people hit hardest by COVID-19. It was the first ever interactive, audio-only charity fundraiser to stream 24-hours of live entertainment and be held on a social media platform (Clubhouse).

“I’m here to pay tribute to Chadwick Boseman. I had to be here for my brother.” said Crews as he greeted the virtual audience.

The CHTV Black History Month Tribute told the story of Chadwick’s background. “His acting teacher was Phylicia Rashad and she was able to secure funding for Chadwick's studies from Denzel Washington. When the two met after Black Panther, Denzel jokingly responded to Chadwick that he owed him money.” said the CHTV announcer over soft jazz music.

Crews spoke about his history with Boseman. “Chadwick was an amazing person. We worked together during his first film and he always gave his all, he knew his craft and just had so much enthusiasm!” the award-winning author said.

Many celebrities including the likes of Tyrese, Meek Mill, Ariana Grande, Oprah and Tiffany Haddish are just a few who have been seen on Clubhouse. Crews is best known for his roles in The Expendables, Brooklyn Nine-Nine and Everybody Hates Chris.