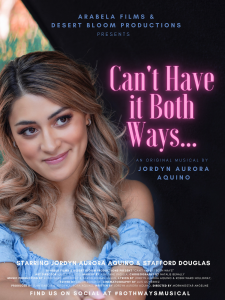 “Can’t Have It Both Ways” Musical Short by Jordyn Aquino

With this film, I wanted to create something fun yet nuanced, energetic and heartfelt, that could open up essential dialogues about difficult conversations about inequality.”
— JORDYN AQUINO

SANTA FE, NM, UNITED STATES, February 24, 2021 /EINPresswire.com/ — Actor, creative director, writer, producer, Jordyn Aurora Aquino (Desert Bloom Productions), and filmmaker, producer, Jenn Garcia (Arabela Films) have released the trailer for their short musical film, “Can’t Have it Both Ways” inspired by current social issues and a need to bring awareness to being “seen” as an equal, and the importance of taking a stand for the good of all. The film was produced under strict Covid-safe conditions, from the concept to the final cut, taking less than 7 weeks.

Inspired by the social unrest by groups of marginalized Americans, Jordyn Aurora Aquino began writing “Can’t Have it Both Ways,” with a vision of sharing an anthem to help break down walls of hate and bigotry with an inspirational song. Composer, Robin Ward-Holloway (Up and Down Theatre Company, MacGyver Musical), was brought in to produce the music and assist with lyrics, while Morningstar Angeline (Morningstar Media, Sundance Indigenous Lab Fellow) joined to direct the film. The film also stars Jordyn Aurora Aquino (The Surrogate, Army of the Dead, Silk Road) and Stafford Douglas ("Better Call Saul," "Longmire," "The Night Shift.”).

In the short film, Aquino’s character, a Latina woman, finds herself in an uncomfortable position on a date with a white male, played by Douglas. Things are going well until a statement made by ‘Douglas’ triggers a red flag as ‘Aquino’ realizes that their socio-political differences may be too far apart to move forward with their relationship, and she stops the conversation to address these divides ‘in song.’ Aquino belts out, “You Can’t Have It Both Ways,” an inspiring pop anthem, addressing concerns for marginalized individuals by bringing attention to one’s ability to pick and choose which groups are discriminated against while claiming to be a “nice guy.”

Jordyn shared “As a woman of color, I have had so many uncomfortable conversations about race, discrimination, and the blindspots of those privileged enough to bypass said issues entirely. With this film, I wanted to create something fun yet nuanced, energetic and heartfelt, that could open up essential dialogues about difficult conversations about inequality. I hope this short film will inspire the audience to listen with compassion and educate themselves, by truly recognizing marginalized voices, and embracing diversity — especially, in the wake of such a polarizing and divisive administration.” She further added, “The cast, crew, and talented team behind this film is incredibly diverse and passionate. We collectively represent the message of this film, and it’s very powerful. Words cannot express how grateful I am for those who made this possible. It truly took a village, a very talented and committed village.”

About “Can’t Have it Both Ways”
This musical short was produced by Latina and Filipina filmmakers, Jenn Garcia and Jordyn Aurora Aquino. Garcia’s notable credits include her award-winning and Academy Award qualifying short film ‘Pozole.’ While Aquino, an actress, writer, and producer, can be seen on Netflix’s Daybreak, Better Call Saul and starring on Lifetime’s recent release, ‘The Secret Life of a Celebrity Surrogate.’ The film was directed by queer indigenous filmmaker and 2018 Sundance Lab Fellow Morningstar Angeline, shot by Latino cinematographer, Luis Gutierrez, and choreographed by indigenous dancer and choreographer Natalie Benally. The film is currently being submitted to film festivals as an important anthem and call to all to break down the walls of bigotry and hate, and come together in a celebration of diversity and solidarity. #BothWaysMusical

Can’t Have it Both Ways Short Musical Film