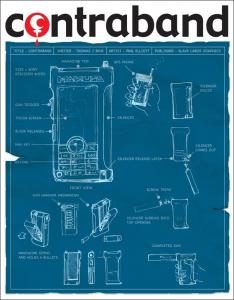 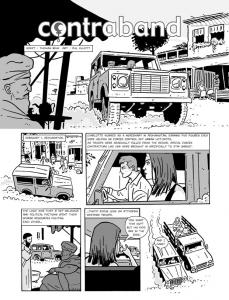 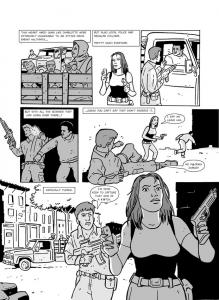 When a hacker shifts real-time ownership of a wildly popular social app to any creator of its’ top-viewed video, rampant violence, misinformation and privacy invasion ensues – as people everywhere chase the money, fame and power of being ranked #1.

The story centres on a self-styled citizen journalist forced to hunt down an activist who is sabotaging a ruthless entrepreneur’s dark web social media app, Contraband. His search leads him into a voyeur underground where profit-hungry youths prowl city streets secretly inciting, staging and filming violent events to satisfy society’s demand for sensational content.

Originally published in 2007, Contraband has been praised by both mainstream and independent reviewers. The FT says “Behe's dialogue brings a hip, hyper-real energy to his plot, while Elliot's deceptively plain artwork evokes a shabby world of compromised morals.” Entertainment Weekly notes "Behe's critique of the public's willingness to watch all manner of depravity is a righteous, if not an original, one.” Broken Frontiers believes Contraband is "as visionary as the technology Behe writes about.”

Contraband’s chilling collection of ideas in an earlier era may have seemed outrageous – but are now rampant in 2021. Dark web communication apps secretly serving criminals banned from Twitter, Facebook and other big name social apps. Rampant “happy slapping” with credibility-hungry kids filming violent, exploitive acts. Professional citizen journalists empowered with mobiles chasing down video stories to gain their own online fame. Contraband is an engaging story in it’s own right – and readers are treated to additional intrigue of identifying its social privacy predictions which have come true.

“We weren’t trying to be prophetic when creating Contraband 15 years ago – but I suppose we did anticipate some of the more significant and unfortunate trends in the social media world,” explained Behe. “Meaningful public dialogue is focused now around key issues threaded throughout the book: fake news, government spying, data privacy theft, video violence. But Contraband was intended to be a cool little story – anyone could enjoy.”