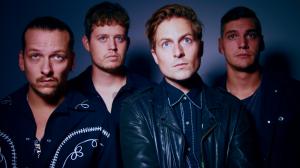 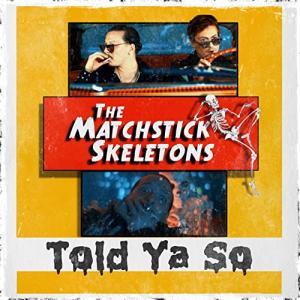 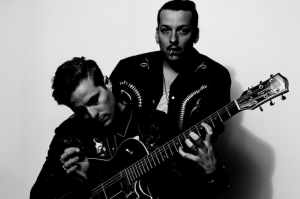 The founders of the band: Neu Mannas & Matty Carolei

The Matchstick Skeletons debut LP "Change The Channel" will be released in mid-2021 worldwide.

The song is about being hopelessly in love with someone who knocks your teeth out…hurts!”
— Neu Mannas (Singer of The Matchstick Skeletons)

LOS ANGELES, CA, USA, January 15, 2021 /EINPresswire.com/ — The Matchstick Skeletons are proud to announce their first UK radio single release for their song, "Told Ya So". Originally from Vancouver, Canada, the now LA-based transplants are setting their eyes overseas for their next endeavor. The track previously charted Top 20 on the Canadian Commercial Rock Radio Charts.

"Told Ya So" is a high energy, funk-inspired, rock n' roll tune. "We wanted to lead with a song you could either headbang or shake your ass to, and both simultaneously if you're very coordinated," singer Neu Mannas explained. "The song is about being hopelessly in love with someone who knocks your teeth out…hurts!"

Prior to the pandemic, the band was on tour throughout the US with The Glorious Sons. When the tour ended and their live show opportunities limited, the band focused their efforts on recording. The result is an upcoming LP made up of songs the band wrote together on tour and were finished by Neu while he was alone in an RV in California's Mojave Desert. "Your environment seeps into the songs whether you like it or not, and with this record, you can feel Joshua Tree and the solitude in the finished song. It was me, the snakes, and the coyotes, getting stuck in earthquakes, dodging state troopers." The LP was mixed by UK's Mark Rankin (know for his work with Queens of the Stone Age, Adele, Spoon & Weezer), and Ben Kaplan (Biffy Clyro, Mother Mother) and will be released later this year.

The Matchstick Skeletons was founded by lead singer (& multi-instrumentalist), Neu Mannas, and drummer, Matty Carolei but the band now also includes Cole Friesen playing bass and Ryan Stead on Guitar and Keyboard. Both Neu and Matty were previously in a rock group called, Head of the Herd. "I was on the piano from Bohemian Rhapsody, Matty was on the drums from OK Computer, while in the same courtyard the Oasis boys beat each other with cricket bats, we shared a look and knew it was time to start the band we've always wanted to be in. That's the moment The Matchstick Skeletons was created."

"Told Ya So" is now available worldwide on all major streaming platforms including Spotify, Apple Music, and Amazon.

“Told Ya So” Music Video