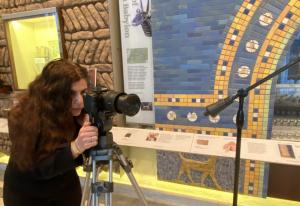 MICHIGAN, USA, January 7, 2021 /EINPresswire.com/ — Weam Namou is an Iraqi-American author, female filmmaker and journalist. She has released thirteen books and is an ambassador for the Authors Guild of America, the United States' largest and oldest writing organization.

The Great American Family was written, directed and produced by Weam. The book and documentary tell the story about Dawn Hanna who had been accused of conspiracy against the United States by brokering telecommunication equipment to Iraq during the sanctions. What Dawn did not know is that her co-conspirator was a CIA operative and that the whole project was funded by the United States to listen in on Saddam Hussein and his men. They said Dawn had no idea that the equipment was going to Iraq. This coupled with sworn affidavits did not change her sentence. Weam shows audiences how the American Dream is being taken away from American families through lies leading to war, a criminal justice system that is driven by greed, a democracy based on double standards, terrorism and sanctions.

Initially Weam did not want to tell Dawn’s story as it was too close to home and she wanted to stay far away from its political topic. Weam was born to an ancient lineage of Chaldeans, Neo Babylonians who embraced Christianity in ancient Mesopotamia, today known as Iraq. in 1979, when Saddam Hussein had become president, he created more fear in the people, making it clear that those who do not follow him will receive harsher treatment in return. Weam explains how she even felt the dictator's power at her school, when she was hit by the principal, in front of students, because she missed a parade that celebrated his presidency.

Weam’s father decided it was time to leave Iraq for good because of political and religious reasons. The family secretly fled Iraq in 1980, telling no one of their plans and not getting to say goodbye to anyone. They stayed in Jordan, awaiting their US visas to be approved and finally arrived in Michigan in 1981. Weam explains that having both nationalities within her has been a struggle, especially seeing the wars, sanctions and killings of Christians in Iraq.

After Dawn's family approached Weam to tell their story, she was uncertain, however felt that it was her responsibility to tell the story of Dawn and her family, and how the decisions of the government can tear apart families.

“Weam Namou’s movie is like a virtual road map to how we came to have the political distrust and paranoia of today,” said President of Porter Pictures of Beverly Hills, Jeff Porter “She has been an absolute delight to work with on this important story, and I look forward to more empowering and socially conscious documentaries from her team!” Porter has recently signed a contract with Weam to represent her award winning documentary film The Great American Family.

Weam also signed a contract with Gregory Johnson of Range Media Partners to option her book. “The Great American Family is based on the true life story of a brother and sister’s life being turned upside down via a gross abuse of power by the US government,” commented Johnson. “The unfortunate tale of Dawn and Darrin Hanna is rooted in greed, spies and lies that shine yet another light on the corruption and double standards in the American justice system. It’s a story that's hard to believe, but one that proves fact is stranger than fiction.”

Weam is the Executive Director of the Chaldean Cultural Center, which houses the world’s first and only Chaldean museum. She is also the founder of The Path of Consciousness, a spiritual and writing community, and Unique Voices Films, a 501(c)(3) nonprofit organization. Weam’s studies and research on the stories of ancient female deities of her birth land Mesopotamia led her to writing her latest book Mesopotamian Goddesses: Unveiling Your Feminine Power.

Weam’s strive for social justice and democracy inspires female writers and filmmakers to take chances and speak their truths. Her work also inspires writers, producers and directors to take on subjects that might seem uncomfortable at first, but will make a difference in people's lives. Her interesting, and rare, Iraq-American background gives readers and watchers great insights to what it means to be in the minority of two countries, religiously, socially and politically.