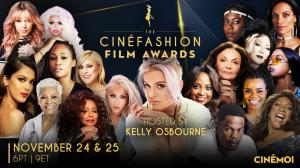 "The 2020 CinéFashion Film Awards nominees have pushed the artistic and cinematic boundaries of fashion, film, music, storytelling and the art of social consciousness forward," says Daphna Edwards Ziman, Executive Producer and President of CINÉMOI. “We recognize the profound accomplishments of the recipients of the icon awards, Chaka Khan, DVF, Rosario Dawson, Abrima Erwiah and Raja Kumari. These iconic women have created legacies as pioneers who have broken down barriers fearlessly carrying the torch for future generations and women across our world."

The CinéFashion Film Awards, 15-time Telly Award winner, is an original CINÉMOI production with esteemed international recognition. The CinéFashion Film Awards is now on its 6th year of production and continues to create and recognize the best in fashion and films from around the globe. This edition of the CFFAs welcomes Assaf Blecher as Executive Producer, who was also EP on shows like the American Music Awards, Billboard Music Awards live red carpet show and the Streamy Awards.

Elegant television, CINÉMOI is an award-winning film, high fashion and international lifestyle channel offering a lens to the world at large, to highly curated and acclaimed movies and TV series, originals, exclusive global events and specials.

Our premium programming currently gives viewers front row seats to a technicolor world of international titles, film festivals, and an array of glamorous events, including the Cannes, Berlin & Venice Film Festivals, the Paris, New York, Milan and London fashion weeks and the exclusive broadcast of the CinéFashion Film Awards.

CINÉMOI was created in 2012 and is one of the world’s only women-owned television networks.