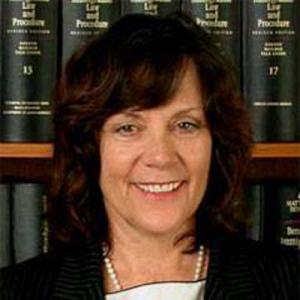 Her landmark victory in the 9th Circuit Court of Appeals, Nasseri v. Moschorak, opened the door for women fleeing violence to seek refuge in the United States. The decision, recently under attack by former Attorney General Jeff Sessions, would become the subject of a motion picture titled Saint Judy, starring Michelle Monaghan and Alfred Molina.

A native New Yorker, Judy's early dramatic training and a brief career acting off-Broadway helped her to hone the courtroom acumen which has helped deliver so many from desperate circumstances. Ms. Wood's passion for social justice has become a true calling and, since graduating Pepperdine School of Law, she's helmed dozens of precedent setting decisions.

In addition to a thriving legal practice, Judy also heads up the Human Rights Project, a non-profit devoted to advocating for the rights of refugees around the world. Indeed, Ms. Wood's record as a tireless champion for the rights of immigrants speaks for itself. Most recently, she's scheduled to be presented with the Wonder Woman of the 4th Lifetime Achievement Award by Los Angeles City Councilman David Ryu.

Listen to the show on BlogTalkRadio

For more information about our guest, please visit https://www.lawofficesofjudithlwood.com/