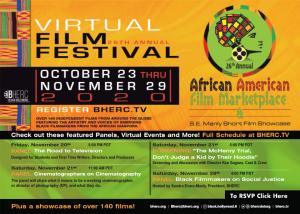 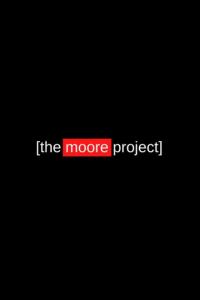 Panels of information for a career in the industry, a deep dive into cinematography and the impact of social justice films round out the 2020 Fest experience!

During the Social Justice screening and panels, the audience is invited to share their reactions, and how films inform, inspire and/or impact their actions and involvement in social justice issues.”
— Sandra J. Evers-Manly, President and Founder, BHERC

LOS ANGELES, CA, US, November 19, 2020 /EINPresswire.com/ — (Hollywood, CA) – As The Black Hollywood Education and Resource Center (BHERC) reaches midway of the month-long 26th Annual African American Film Marketplace & S.E. Manly Short Film Showcase (AAFM SEMSFS) airing online at www.BHERC.TV now through Sunday, November 29, 2020, Executive Director and Festival Curator John Forbes is pleased to announce the programming for the final two weeks of the festival. The virtual festival has entertained more than 5300 attendees from across the globe who have watched on-demand the industry panels, special events and screenings and the 140 curated films with stories of all genres told by diverse filmmakers from 18 countries and 20 US states of all ages, the youngest being nine years old.

As the festival begins its closing two weeks, BHERC invites the public to consider the festival as their choice for entertainment, inspiration and enlightenment during the upcoming Holiday Season and recently stricter imposed nation-wide stay-at-home orders. The festival continues to offer the complete portfolio of 140 films that may be sorted and selected by genres such as: Action, Animation, Comedy, Documentary, Drama, Historical, Horror, Inspirational, Music, Romance, Sci-Fi, Spoken Word, and Thriller. They may also explore by topics such as Art, Diversity, Family, Faith-Based, LGBTQ, Mental Health, People with Disabilities and Social Justice. The festival also plays host to a few young filmmakers from Film schools such as: Academy of Art, Florida State University, High Definition Film Academy, Loyola Marymount University, New York Film Academy, Oral Roberts University, University of California Los Angeles, and University of Southern California. However, the youngest filmmaker is a self-taught nine-year old.

In addition, the weekends offer a bonanza of diverse panels. Beginning this Friday, newcomers and those interested in a career in television can log and join professionals as they discuss share vital insight and information in the panel “The Road To Television,” Friday, November 20, 2020, 5:00PM (PDT). Top television professionals will discuss the various careers within the industry such as: casting, make-up, screen writing, editing, visual effects, cinematography, animation, producing and directing. They will discuss how to go about assessing your skills and deciding which category to pursue. The all important question, “Should I go to film school?” How can I get experience. Once you get the experience, how do you get the jobs. Where do you look for the jobs, how do you build your network. “There are many paths to a successful career. Some have been thru film school many have not,” stated Sandra Evers-Manly, President and Founder, BHERC. “In all of the paths we will explore we will find that the elements of passion, determination and patience were

Saturday, November 21, 2020 at 11:00AM (PDT) BHERC hosts “Cinematographers on Cinematography”. The panel will share what it means to be a working cinematographer, or director of photography (DP), what they do? What equipment is used, lighting techniques, and challenges faced to “get the shot.” Best practices for partnership with Directors and what aspiring Directors should know. What DP’s can do to make this relationship successful. Do you shoot with or without and editor? Who else to you work with? What skills do you need to be a Cinematographer? Moderated by Mobolaji Olaoniye, Director of Photography (DP), filmmaker and Founder, SPORAS. Panelists include: John Njaga Demps, DP; Emmy-winning John Simmons, ASC.; Emmy-winning Donald A. Morgan, ASC, and Michelle Crenshaw, DP.

Saturday, November 28, 2020 4:00PM (PDT) Join President and Founder Sandra Evers-Manly, cousin of slain civil rights leader Medgar Evers as she leads the audience through a screening and discussion of selected courageous Social Justice films from the 2020 festival. During the discussion, the audience is invited to share how these films and “social justice” films in general impact and/or inform their actions and involvement in social justice issues.

Don’t miss these exciting events during the final two weeks of the 26th Annual African American Film Marketplace & S.E. Manly Short Film Showcase (AAFM SEMSFS). Register Today at www.BHERC.TV for panels and Festival passes. $75.00 for a full Festival Pass, $25.00 for a Day Pass and $10.00 for a block of 5 films. All panels and special events are Free.