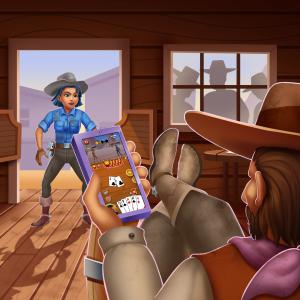 The game is now available worldwide on both iPhone and Android, with new and exciting features enhancing the classical family card game of WAR with a twist. The game is now accessible anytime and anywhere through your phone with just a simple tap!

Taking you back to the original classical game through the fantastic graphics and effects, WAR: Wild West allows players to sit and relax while enjoying a simple, fun, and engaging game that is easy to play but hard to master… Just like the old days!

We all know; no WAR experience would be complete without the classical throw down cards of the same rank! The game will not fail to impress what it includes!

"War was probably the first card game we learned to play growing up!" said Nour KHRAIS, Founder and CEO at Maysalward. "We're excited to build a game that combines a touch of traditional CCG gameplay with innovative, simplified mechanics inspired by a classic popular card game".

Check out the launch trailer: https://youtu.be/bWFWoYR5xiQ

Howdy partner! Down for some bounty hunting? Well, saddle up because you're in for a great ride!