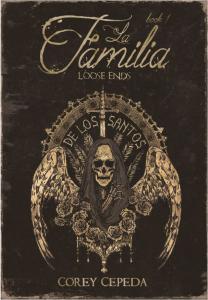 Each book in this five-part series will have a portion of sales donated for different issues, including cancer and dementia / Alzheimer’s research. 50 percent of the proceeds from the first book will go to organizations across the United States that are working to fight human sex trafficking.

“La Familia: Loose Ends” opens with the attempted murder of the country’s most powerful drug lord, Vicente De Los Santos. It all happens at his 10-year-old daughter’s birthday party and in the wake, innocent children and women are slaughtered, quickly leading to a national Armageddon. Severely injured, Vicente, “The Boss of Bosses,” is out for blood. His eldest son, Ignacio hunts for those responsible while carrying horrific secrets of his own. Ignacio’s brother, Santino, returns home to help his family, but becomes suspect that something deeply sinister is afoot.

Vicente’s brother, Aurelio, a fierce and honest lieutenant in the Sinaloa State police, starts to investigate and quickly pieces together a frightening enemy. Gabriella, Vicente’s wife, is a cunning business woman and mother. She works to keep the family, including her young daughter, Lucita, together while she continues to support the efforts of her ruthless husband.

“I’ve had this incredible story in my head now for a few years,” Corey says. “After a recent career break from working in the pharmaceutical industry, I decided it was time to put pen to paper. The words poured out effortlessly.”

Inspired by TV shows such as “Breaking Bad” and “Sons of Anarchy,” Corey says he wanted to write something that showed true conflict between characters.

“I wanted to create a series that I’d want to read and see on TV – something engaging, gripping, dark and conflicted,” he says. “This series is the end result.”

“La Familia: Loose Ends” is a phenomenal introduction into the dark underbelly of the De Los Santos cartel dynasty. It exposes a highly complex and powerful family who are destined for a tragic end.

Corey captures this spectacularly uncompromising fictional account of a complex and merciless family that struggles with two things: How to maintain their chokehold on the drug empire they have created; and the bloodlines that bond them.

The book is available in print and digital format on Amazon, iBook’s, Draft2Digital, Smash Words, Kobo, and from all other major book retailers.

This press release was issued on behalf of the news source (Razor Sharp Publishing) who is solely responsible for its accuracy.