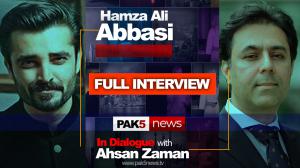 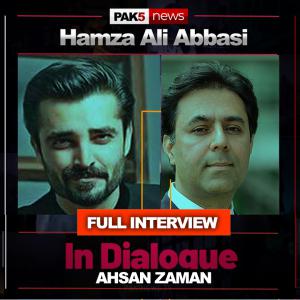 The TV and film actor's full interview can now be seen on PAK5 News website in the programme “In-Dialogue with Ahsan Zaman” at this link:
https://pak5news.tv/hamza-ali-abbasi-interview-latest-2020-teaser-promo/

Below are more, fresh excerpts from this interview:

WAAR AND JPNA:
Responding to a question by host Ahsan Zaman on which film was more pleasurable to watch between Waar and JPNA, Hamza said:
"Visually WAAR was a much much more superior film cinematography wise, but story wise and content wise JPNA I really enjoyed more, I enjoyed the comedy in it, it had great comedy"

"Noori Nath is one the most legendary characters that Pakistani cinema film industry has seen, played by the likes of Mustafa Qureshi….redoing that plus adorning that entire character was something which I think is one the biggest opportunities I had in my acting career"

DIRILIŞ: ERTUĞRUL
– On his views about the Turkish play Ertuğrul, Hamza very happily replied:
“You see I am just happy something became such a big success without an item number in it”

IMRAN KHAN AND PTI:
– When host Ahsan Zaman asked Hamza why he supported Imran Khan and PTI, he replied:
"He (Imran Khan) is an honest person, that much I can tell you. And the other choices you
have Bilal Bhutto, Zardari and Nawaz Sharif, in my mind they’ve been tried and tested,
they have done nothing for the country."

Full interview can now be seen on PAK5 NEWS website link below:
https://pak5news.tv/hamza-ali-abbasi-interview-latest-2020-teaser-promo/