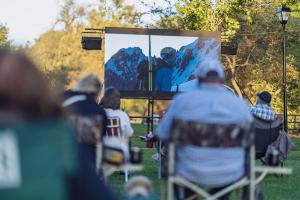 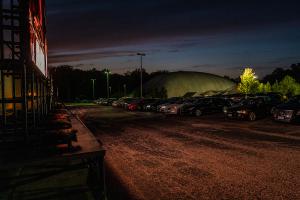 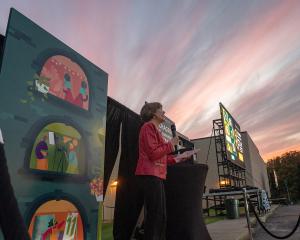 Recognizing that the community would greatly appreciate a feeling of connection after months of isolation due to the world-wide COVID-19 pandemic, the CDFF staff created both in-person venues — featuring a drive-in experience and a 24/7 screen in Riverside Park — as well as an online streaming Festival to provide the best in documentary film to their audience.

The Festival traditionally draws audiences from all over Northeast Ohio, the United States and the world to experience documentary films and the compelling art and culture they highlight during the first week of October.

“CDFF created energy, excitement, fun and a feeling of connection during this unprecedented time,” said Festival Member Jan Jones. “I enjoyed day and night Drive-In Docs and saw more films this year than ever before because of the terrific streaming offers. Thank you to the CDFF team for working against all odds to make this year’s Chagrin Documentary Film Festival one to remember!”

Expanding to include an online platform for the first time, the Festival’s CDFF On Demand featured 100 films, which were viewed more than 15,000 times. The drive-in, consisting of three LED screens, hosted an audience of more than 1,100 over a five-day period, where filmgoers could safely enjoy films from the comfort of their vehicles while maintaining the “community” atmosphere that CDFF is known to offer.

At the center of CDFF’s mission are the filmmakers, who would normally travel from around the globe to attend, and interact, with audience members throughout Chagrin Falls. Lacking the ability to bring the filmmakers to the village, CDFF continued the tradition by bringing its audiences and filmmakers together via Zoom.

Audience members were treated to a wide variety of interviews with filmmakers, panels and even a “Filmmaker Zoom Happy Hour,” allowing the public to engage with documentarians in a safe way, while still keeping the focus on the filmmakers’ impactful work.

“From the beginning to the end, everything was top notch with an incredibly unique festival experience – and during a world-wide pandemic, no less,” said filmmaker Christian Taylor, who accepted her Emerging Filmmaker Award in front of the crowd at the drive-in venue. “The town of Chagrin Falls is quaint and incredibly friendly brimming with love and excitement for festival activities, the volunteers are passionate, kind and helpful, the hotels and restaurants were excellent and the festival staff couldn’t have been nicer.”

Earlier this year, CDFF announced a new partnership with Gravitas Ventures to benefit documentary filmmakers and further their shared missions of promoting the art of documentary film by guaranteeing distribution to the winners of two categories at this year’s festival.

The two films offered distribution are "Kusasa", directed by Shane Vermooten, which won the David Ponce Best of the Fest award, and "The Girl Who Wore Freedom", directed by Christian Taylor, which took home the Emerging Filmmaker honors.

This year’s Festival received grant support from Ohio Humanities and the National Endowment for the Arts.