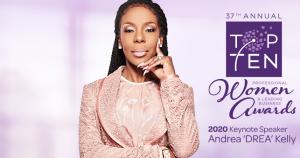 Reality TV Star Andrea “DREA” Kelly, the founder of the 12th Round Foundation, which celebrates survivors of domestic violence and provides education so no one will become a victim, will keynote at the 37th Annual Top Ten Professional Women and Leading Business Awards. 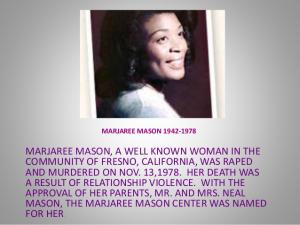 In 1978, Marjaree Mason’s tragic death gained national attention, shining a spotlight on domestic violence and galvanizing the Fresno, CA community into taking action to ensure that no one would suffer the same fate. For more information, visit www.mmcenter.org.

If you are a victim of domestic violence, there is never an expiration date on speaking your truth. If you need help, please reach out to the Marjaree Mason Center, a life saving organization now!”
— Andrea "DREA" Kelly, founder of the 12th Round Foundation.

LOS ANGELES, CA, UNITED STATES, October 19, 2020 /EINPresswire.com/ — Marjaree Mason Center, based in Fresno, California, presents its 37th Annual Top Ten Professional Women and Leading Business Awards on Oct. 20 from noon to 1 p.m. with a pre-show beginning at 11:45 p.m. Andrea “DREA” Kelly will be the keynote speaker for the virtual event. DREA, a dancer, choreographer, entrepreneur, actress, motivational speaker and reality TV star, will share her story so no one will become a victim. The event is free; however, donations are encouraged. For registration, visit www.mmcenter.org.

A survivor of domestic violence from her long-term marriage to R. Kelly, DREA has turned her story into a source of inspiration through presentations at colleges, universities, women’s conferences and rescue centers. "As a young child, I witnessed my grandfather, a Baptist pastor, choke my grandmother," said DREA. "The next morning, my grandmother got up and cooked breakfast for her husband who prayed over his food. My grandparents’ abusive relationship taught me to act like nothing happened, deal with it silently, and always act like a lady of grace." That incident set the tone as a snapshot of what is normal behavior in a marriage for DREA.

The U.S. Department of Health and Human Services Office of Women’s Health reports that more than 15-million children in the U.S. live in homes where domestic violence has occurred at least once. Those children are at a greater risk of repeating the cycle by entering into an abusive relationship or becoming abusers themselves.

“We are thrilled for DREA Kelly to speak at this year’s Top Ten event,” said Nicole Linder, Marjaree Mason Center’s executive director. “DREA’s story reminds us that domestic violence knows no boundaries. However, with proper resources, safety and healing, anyone can overcome their trauma to experience a life free of violence.” The “Top Ten” event pays tribute to ten women who have served their communities as role models while making advancements in their professions. The annual event is held every month in October which is designated as Domestic Violence Awareness month.

"If you are a victim of domestic violence it is never too late to get help. Survivors of domestic violence, there is never an expiration date on speaking your truth. We are in this together!,” said DREA. "If you need help, please reach out to this life saving organization now."

Taking the “Rome was not built in a day” approach, she has been writing a self-help memoir, Under The Red Carpet, where she is expresses her passion for women’s empowerment, self-responsibility and the evolution to becoming one’s greatest-self. DREA is the founder of the 12th Round Foundation, which celebrates survivors of domestic violence and aims to provide education so no one will become a victim and commemorate those who are lost to this tragedy.

If you or someone you know needs help, call the National Domestic Violence Hotline at 1-800-799-SAFE (7233), which is free and confidential. For more information or interviews, contact Marie Lemelle at marielemelle@platinumstarpr.com or 213-276-7827.

In 1978, Marjaree Mason seemed to have it all: a job she enjoyed with the National Economic Development Association, an approaching graduation from Fresno State University, an independent life blessed by supportive friends and family. At age 36, Marjaree was looking forward to starting an exciting new chapter in her life – a season of joy, fulfillment and purpose.

But in November of that year, Marjaree’s joy was overshadowed by the return of her ex-boyfriend – a Fresno County sheriff’s deputy named Robert Tillman. A 230-pound bodybuilder and Karate black belt ten years her junior, Tillman was an imposing presence who refused to go away despite Marjaree’s insistence that he leave her alone. Her continued rejection fueled Tillman’s rage, which exploded in violence one night as he kidnapped, beat and raped Marjaree before releasing her the next day.

Frightened and confused, Marjaree didn’t know where to turn, and feared retaliation if she were to report the crime. Convinced by friends to seek medical treatment, Marjaree shared details of her ordeal with hospital personnel, who reported the incident to the Sheriff’s Department. But before an investigation was launched, Tillman once again kidnapped and assaulted Marjaree, ultimately fatally shooting her before turning the gun on himself.

In 1979, the Marjaree Mason Center was born, and has since worked tirelessly to provide a safe, supportive environment for those exposed to domestic violence.

Andrea “DREA” Kelly is a well-known dancer,choreographer, entrepreneur, actress, motivational speaker and reality TV star. She transformed her personal experiences of marital abuse and heartache into a relentless crusade of being “a voice for the voiceless.” Not allowing the power and fame of her abuser to stop her, she proudly promotes domestic violence awareness and shares her testimony through her advocacy and motivational speaking. But, long before she stunned the world with her story of bravery and resilience, she was gaining notoriety as a principal dancer and choreographer.

During her low-profile marriage to R. Kelly, a shadow was cast over her acting and dancing career. Though she welcomed family life, it was tainted with emotional, sexual, physical and financial abuse. In a defining moment of courage, she left her abuser and remained silent about the abuse for several years. Since finding her voice, she spent years fighting and advocating for domestic violence awareness.

Being a survivor of domestic violence, DREA Kelly turned her life story into a source of motivation and has been invited to speak on national and international platforms. From Anguilla to California, Ms. Kelly has key noted for colleges, universities, women’s conferences and rescue centers.

Follow DREA on all social media platforms at officialdreakelly.