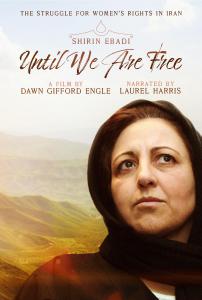 Raphael Berdugo’s Cité Films, is heading to the MIA market in Rome with the politically-engaged documentary film, “Shirin Ebadi: Until We Are Free.”

Ebadi has been harassed and spied on by the Iranian government which broke down her marriage, and took away her home, but the fearless lawyer has never given up on her mission,”
— Raphael Berdugo

PARIS, FRANCE, October 17, 2020 /EINPresswire.com/ — Paris-based Cité Films, headed by Raphael Berdugo, former owner of Roissy Films, one of France’s flagship production-sales houses, has just signed a sales contract for the film, "Shirin Ebadi: Until We Are Free". This feature length documentary film was one of only six officially selected for the Venice International Film Festival's Gap Financing Market in September of 2020, and it is currently in post-production.

“Shirin Ebadi: Until We Are Free,” is directed by Dawn Gifford Engle and tells the story of Ebadi, a heroic human rights lawyer defending women and children against the brutalities of the Iranian regime. Ebadi was the first Muslim woman to ever receive the Nobel Peace Prize. "Ebadi has been harassed and spied on by the Iranian government which broke down her marriage, and took away her home, but the fearless lawyer has never given up on her mission," said Berdugo.

Cité Films is handling international sales and co-production for “Shirin Ebadi: Until We Are Free.” The documentary will soon be completed and Berdugo said he aims to have it premiere at a high-profile film festival such as Berlin or Cannes.

The French outfit is also co-producing Alex Helfrecht’s “A Winter’s Journey,” a feature blending live-action, CGI and hand-painted backgrounds made by the creative teams behind “Despicable Me” and “Loving Vincent.” “A Winter’s Journey” stars Gaspard Ulliel and John Malkovich, and is being sold by MK2 Films.

Cité Films only co-produces and handles international sales for one or two movies per year. The banner’s recent credits include the critically acclaimed South American drama “The Desert Bride” which played at Cannes’ Un Certain Regard in 2017. Cité Films also boasts a library of classics by Michelangelo Antonioni, Federico Fellini, Jean-Luc Godard, Alain Resnais and Wim Wenders.

Shirin Ebadi has inspired millions around the globe through her work as a human rights lawyer defending women and children against an oppressive regime in Iran. Now the film, "Shirin Ebadi: Until We Are Free", tells for the very first time her riveting personal life story of courage and defiance in the face of a government out to destroy her, her family, and her mission. She continues the struggle for women's rights in Iran, in the face of a government determined to take everything from her.

The film is directed by Dawn Gifford Engle, whose previous documentary, “The Dalai Lama: Scientist,” premiered at Venice in 2019. An activist and a filmmaker, she has won more than 20 "best director" awards for her films, and she has been nominated 17 times for the Nobel Peace Prize — by Nobel Peace Prize Laureates, including Shirin Ebadi.

"Ever since I met Shirin Ebadi," director Engle says, "I have been fascinated by her courage in taking on one of the most repressive regimes in the world. She lives under constant death threats. She is spied upon and followed. She was thrown into prison, and when that did not break her, they imprisoned her sister, and her husband, and took from her every single thing that she owned, including her ability to return to her beloved country without being tossed into prison for life. But they could not take away her fierce conviction that her people would one day be free – and that it will, indeed, be the women of Iran who will finally bring about an end to this brutal regime."

Executive Producer Ivan Suvanjieff says, "The audience for this film is people who care about rights for women, people who care about Human Rights, and those who are interested in the Nobel Peace Prize, or Iran, or Persian history, or the Middle East. And everyone around the world who is looking for an inspiring story full of brave, resilient women who refuse to let hope die."