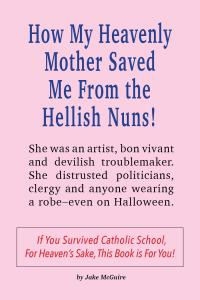 New Mom vs. the nuns book set to awaken memories of all who attended Catholic school! 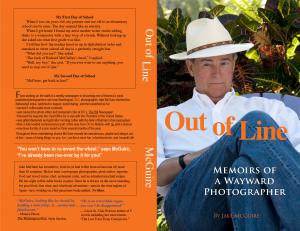 McGuire colorful memoirs is being finished up! His mom book is the basis for the first chapter!

Nuns hoisted author by his ears, beat his knuckles with a ruler for writing left-handed & threatened him with the horror of hairy palms for touching himself!

McGuire is looking like he should be holding a mint julep, or yachting or doing something else genteel. His face is aristocratic… his manner is intense.”
— Monica Hesse • The Washington Post

NEW YORK, NY, USA, October 14, 2020 /EINPresswire.com/ — Washington, D.C. photographer, author and publisher has just released a new book, sure to bring back dinner-table, book-club, and camp-fire stories to all who survived catholic school nuns, evangelical preachers, and all the righteous who threatened hellfire and damnation when we were young.

"Much of it is now laughable," says McGuire, "though as small children it scared the Dickens out of us."

“The book credits my mother for saving me from the often ‘hellish’ nuns who picked me up by my ears, beat me with a ruler for writing with my left hand, and convinced the boys in the class that they'd go blind, become r*tarded, and would grow hairy palms if we touched ourselves below the belt."

"However," says McGuire, "the book is much more than just keeping the few errant nuns at bay, as it contains dozens of entertaining and knee-slapping stories about my artist/rebel mother's outside-the-box way of raising five kids."

"Amongst the highlights," says McGuire, "my mother drove an authentic old Woody Wagon that had brakes so bad she needed to use the horn to keep from running over jaywalkers, dogs, students, and had the nuns fleeing at the sound of her approaching! So every day was a continuous, eye-opening adventure in that old car. It even had forest mushrooms growing out of the real, but partially rotting, wood siding so it frightened the neighbors who viewed it as some sort of a fungus-mobile and kept their kids away!"

McGuire, who has 11 books in print says he comes from a long line of Irish storytellers and says he follows the Strunk & White school of writing (arguable the most read book in English on how to write with clarity: crisp sentences, no cumbersome words, and colorful imagery.) In fact, when asked what is a good sample of clear writing, he quotes what he says is the definition of Irish diplomacy: "The ability to tell someone to go to hell in a way they look forward to making the trip."

“I inherited my mother’s Irish story-telling gene,” he says, “so last spring I wrote a Mother's Day tribute book but it was, by nature, a bit limited in scope and generally applied to that one day of the year, so I added mom vs. the nuns tensions, jaw-dropping mom-saves-the-day stories, and gave it a year round appeal."

The book features dozens of McGuire’s childhood stories about his mother’s antics including one where his mom who loved to toy with a devout family on his street who only allowed their children to be biblical characters on Halloween.

“So, one Halloween, she sent my older sister Dorothy and my younger sister Mary dressed in scary black, grim-reaper-like costumes, along with me in a cardboard box painted white to the devout neighbor’s house to trick or treat. Can you guess which biblical characters those darling little McGuire children were?

“Glad you asked,” says McGuire, “My sisters were Sodom and Gomorrah, and I was a Pillar of Salt.”

Washington Post writer, Monica Hesse, who penned a lengthy feature on McGuire in August of 2010, wrote, “McGuire is looking like he should be holding a mint julep, or yachting or doing something else genteel. His face is aristocratic… his manner is intense.”

McGuire’s book is full of “an out-side-the-box-mother, raising-five-kids-inside-the-house” tales and anecdotes so it provides comic relief from the current corona disaster, says McGuire. It covers his childhood years where his mother was an artist by day, and a prankster who played tricks on their neighbors by night.

“She was a rebel who distrusted politicians, clergy and anyone wearing a robe–even on Halloween,” he says, “and–amazingly¬–she still surprises us with an occasional visit from the grave. Really, see page 55!”

And, McGuire has a straightforward pitch for home-bound moms: “If you are going Corona crazy, It’s OK, to buy yourself a Christmas gift,” says McGuire, “I’ve made it easy as my new book is a low-cost, $4.99 digital download!”

In addition to his lively Mother vs. the nuns book, McGuire is finishing up his memoirs entitled, “Out of Line • The Memoirs of a Wayward Photographer.” The book entails his adventures in dozens of countries, how he finessed his way into the Oval Office of the White House, and even grips readers with eye-opening details of how he got invited to drink tea with the Amir of Bahrain in his royal palace and came away with gifts of diamonds and gold!

Another chapter reveals how he, In addition to his adventures of chumming it up with heads of state, he talked his way into the cockpit of a commercial jet and flew it part way from DCA to ATL. And he claims, “If the passengers knew I was flying the plane they would have said, ‘Let’s Roll’ and would have tossed me out over Spartanburg, South Carolina.”

McGuire says both his Mother vs. the nuns and his memoirs are extremely visual making them ripe for motion pictures, and he even went as far as sending a pitch to George Clooney’s agent, on the outside chance Clooney might want to grab the film rights of his memoirs before some other Hollywood entity does.

And he notes, his mother vs. the nuns book is sharp-focused enough to make a great Saturday Night Live feature.

The book is now live on Amazon both as a digital download and a paperback. see: https://www.amazon.com/Heavenly-Mother-Saved-Hellish-Nuns-ebook/dp/B08KSH53FF/ref=tmm_kin_swatch_0?_encoding=UTF8&qid=&sr=