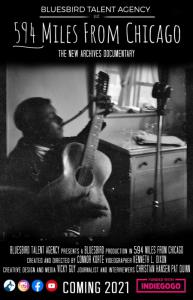 This blues documentary set in Chicago is the first of its kind!”
— Connor Korte, Creator/Director of 594 Miles From Chicago

Blues is an influential musical genre that permeates jazz, rock and roll, and rhythm and blues. Its colorful origins are rooted in the Deep South, emerging as a new sound, fusing African-American work songs with traditional African musical traditions as far back as the 1870s.

The culture and art of the blues remain alive in the Chicago community. However, Korte thinks there is a need to properly document the lives of aging blues performers. He also observes there is no documentary vehicle for new blues players to tell their own stories.

Korte seeks to make a change in the current state of the Chicago blues community by interviewing and documenting the lives of older blues musicians to preserve their stories and share their memories. Likewise, Korte plans to feature the younger generation of blues players to shed light on their dreams and struggles, infusing new life and interest in the blues musical genre and community in Chicago.

Over 45 blues artists will be featured in the “594 Miles From Chicago” documentary film project, along with a highlight called “Women of the Blues” and a memorial for blues artists who have already passed.

Korte is extending his invitation to people who are willing to back this blues documentary film project, with an overall goal to raise $19,500. The amount will be used to cover expenses including camera crew services, lighting, sound, film production, licensing, fees, and promotions.

Individual backers can choose from among different donation options. There are also higher sponsorship tiers interested individuals or companies can opt for.
Korte says his planned blues documentary film project set in Chicago is the first of its kind.

Through the film, he plans to put the spotlight on the Chicago blues community and revitalize interest in the blues. Korte is also hopeful that the film would help to highlight the talented blues community and serve as a vehicle for the discovery of young talent.
Interested investors are encouraged to check out all campaign details on the “594 Miles From Chicago” crowdfunding page on Indiegogo.