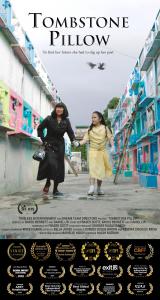 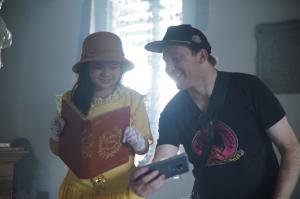 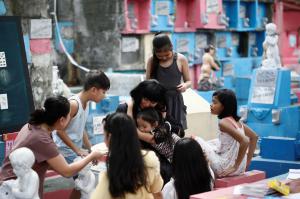 "Tombstone Pillow," the film shot in a Graveyard Where 6,000 People actually Live, Now Presented on Amazon for the first time ever.

Tombstone Pillow, directed by Bayou Bennett and Daniel Lir, is sweeping up many new awards this season as a powerful, humanitarian story from the Philippines.”
— Hollywood Sentinel

MALIBU, CALIFORNIA, UNITED STATES, August 11, 2020 /EINPresswire.com/ — Have You Ever Slept in a Graveyard?

When you were a kid, did you ever sneak into a cemetery at night with a friend under the full moon, hoping not to get caught as you ran around the graves, in search of a ghost? Did you say “Bloody Mary” under the night sky, hoping not to trip over a tombstone on the way out, swinging your legs wildly in the darkness, your heart pounding against your chest as your adrenaline rushed, hoping you didn’t get busted for trespassing or vandalism, or worse—get haunted?

Sleeping with the Dead

Well, that was typical childhood fun for many. But imagine going to the cemetery with your mother, your father, your brothers, and sisters, or your children, and not only staying the night there, but pulling up some old blankets over your head near the grave site, and calling this land of the dead your new home? That is exactly what thousands in the state of Manila in the Philippines have shockingly done, and what the brave filmmaking “Dreamteam Directors” Daniel Lir and Bayou Bennett set out to discover, witness, and to film. “Tombstone Pillow” is the hauntingly exciting new film short that was shot entirely on location in an allegedly haunted graveyard in the Philippines, where reportedly over six-thousand people literally sleep on gravestones, with tombstones for pillows.

The Dreamteam Directors’ film “Tombstone Pillow” tackles vital subjects in 2020, including poverty and the need for food and shelter for all. After a widely successful film festival run, this predominantly English language film has now been accepted by the streaming giant Amazon Films for broadcast, as the company brings “Tombstone Pillow’s” influence even wider around the world.

The film was directed by Dreamteam Directors Bayou Bennett and Daniel Lir, while Bayou was at home in Hollywood and Daniel was down in the graveyard in Manila. As a female director and mother of a young boy, Bayou had to struggle with time differences, causing her to be awake until 7 a.m. many mornings, while dealing with actors and crew on the other side of the planet. Bayou Bennett was the first woman to teach in the Media Studies department at Parsons New School and so had the savvy to use technology to allow her to direct 7,000 miles apart over Facebook Live video.

The film follows wealthy widow Lou Baron as she tries to flee from an angry mob. A poor ‘graveyard girl’–Kendra De Mesa–comes to her rescue, additionally teaching her the most valuable things in life are not what she had in mind. “Tombstone Pillow” was shot and produced by the same team who made “Birdshot,” the Oscar entry for The Philippines in 2018. Due to the heartbreaking subject of “Tombstone Pillow,” as well as it being selected from amongst fierce competition to both Oscar and BAFTA qualifying film festivals, it has also been a favorite with festivals that concentrate on films with humanitarian subjects.