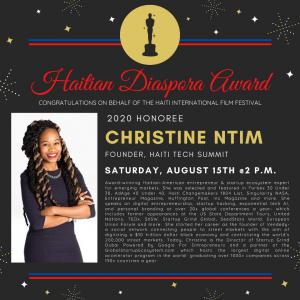 On Sunday, August 16 at 2 p.m., HIFF honors the 2020 Haitian Diaspora Award Honoree Christine Souffrant Ntim, an award-winning Haitian-American entrepreneur and startup ecosystem expert for emerging markets. She is featured in Forbes 30 Under 30, and AdAge 40 Under 40. 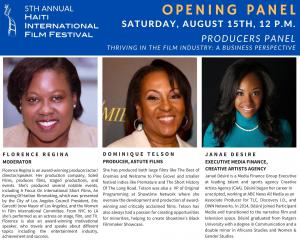 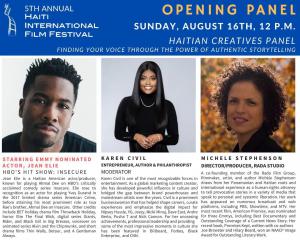 HIFF, in a virtual format, offers an insight to the Haitian people and culture. See the films and panels on Xerb.TV on August 15 -16, 2020 from noon to 6 p.m.

It is critical that we continue to showcase our Haitian filmmakers, especially at this moment in our history when the Black community voice is rising up.”
— Jacquil Constant, Executive Director of Haiti International Film Festival.

HOLLYWOOD, CA, UNITED STATES, August 10, 2020 /EINPresswire.com/ — The pandemic halted the traditional way to attend film festivals worldwide in 2020. The 5th Annual Haiti International Film Festival (HIFF) joins the new "normal" to move online and continue to support Haitian filmmakers by taking the event virtual on August 15 and 16, 2020 from noon to 6 p.m. PST on Xerb.TV. HIFF will be hosted by Actor Bechir Sylvain, the 2019 HIFF Emerging Leader Honoree and community activist from Moun Lakay. Tickets start at $10 to watch one film, $20 for the Festival Day Pass, and $40 for a 2-day VIP Pass at https://xerb.tv/channel/haitiinternationalfilmfestivalorg/virtual-events.

"It is critical that we continue to showcase our Haitian filmmakers, especially at this moment in our history when the Black community voice is rising up," said Jacquil Constant, Executive Director of Haiti International Film Festival and filmmaker. "People should see and hear our voices represented through film.” HIFF is a niche film festival that specializes in portraying the humanity of the Haitian culture through the curation of quality films with authentic narratives from the Haitian Diaspora. Viewers from around the world can log on to Xerb.TV to watch HIFF's exciting line up of 7 shorts, 3 feature films, panels, and the Haitian Diaspora Award.

"The film festival serves as a platform to connect the Haitian Diaspora Film Community to Hollywood," said Constant. "However, with only 24% of independent films being made every year, the film industry needs aspiring filmmakers who create stories that uplift society. The filmmakers need support to showcase these independent films and that is why I created this film festival." Considered as the HBO for Haitian films, HIFF was established in 2015 and is a non-profit corporation with a 501(c)(3) status. The mission is to showcase positive images of Haitian culture through film and art.

"We are excited to present Christine Ntim as the 2020 Haitian Diaspora Award Honoree on Sunday at 2 p.m.," said Constant. Christine Souffrant Ntim is an award-winning Haitian-American entrepreneur and startup ecosystem expert for emerging markets. She was selected and featured in Forbes 30 Under 30, AdAge 40 Under 40, and Caribbean Change Makers 30 Under 30 in 2016. Ntim speaks on leadership, disruptive entrepreneurship, and exponential tech AI, VR, Robotics.

This year, HIFF features two panels. The Producers Panel, "Thriving in the Film Industry: A Business Perspective," is led by the moderator Florence Regina, Actor/Producer, Soleil Films. Panelists are Dominique Telson, Producer, Astute Films and Janae Desire, Executive, Media Finance, Creative Artists Agency. The Haitian Creative Panel, "Finding your Voice through the Power of Authentic Storytelling," will be moderated by Karen Civil, entrepreneur, and author and philanthropist. The panelists are Jean Elie, a Haitian-American actor/producer, and an Emmy Nominee for the series, “Insecure,” and Michele Stephenson, a Haitian director/producer and an Emmy Nominee for the documentary, "American Promise."

"If you want to learn about the business side of the film industry, don't miss this on Saturday, August 15 at noon," said Constant, who was recently honored with the 2020 Caribbean Cultural Innovator Award by myKEEtv, the premier Caribbean TV and magazine in Los Angeles, Canada, and Jamaica. "The second panel on Sunday, August 16 at noon explores the creative side of the film industry, which is equally as important as the producers panel."

"We look forward to this virtual film festival platform that will allow us to reach a wider audience this year, both nationally and internationally," said Constant.

Feature film selections:
2 p.m. – Out of Chaos is a documentary about an artist’s journey in Haiti. A place where an artist is born every day. Directed by Pascal Giacomini- 1 hour

4 p.m. – In Search of Voodoo: Roots to Heaven weaves together a personal, cultural, and spiritual journey-capturing the vibrant tales of Voodoo, West Africa, and Benin’s son, actor Djimon Hounson. 1 hour

12 p.m. – Haitian Creatives Panel: "Finding your Voice through the Power of Authentic Storytelling"

Feature film selection:
3 p.m. – Desrances, starring Jimmy Jean-Louis. Francis looks forward to the birth a son, his heir, and the last descendant of the DESRANCES family and his son is captured and will he find him. Directed and written by Apolline Traore- 1 hour and 35 mins

About the Haiti International Film Festival (HIFF)
The annual film festival has showcased more than 30 films by Haitian filmmakers and supporters of Haiti at the Historic Barnsdall Gallery Theatre in Hollywood, California. HIFF has featured documentaries, short films, and narratives from emerging and well-established filmmakers like award-winning Actor and Producer Jimmy Jean-Louis, to uplift the Haitian voice and presence in an industry where it is often absent. HIFF is a catalyst for Haitian artistic expression and cultural diversity. In 2020, because of COVID-19, HIFF has pivoted to a virtual film festival. This year’s festival selections include 10 films from the Haitian and African Diaspora that are an exploration of the what it means to be Haitian in the Diaspora.