The Next 400 Talk Show Logo 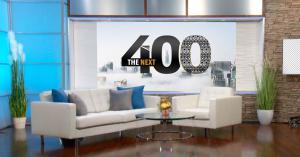 The Next 400 Talk Show Studio

Inspired by Joel Osteen; African American TV Producer Yaw Acheampong Celebrates America and teaches about the history of slavery with "The Next 400" Talk Show

I could be having the worst day ever, but Joel Osteen always has something in his messages that helps me put things into a much broader and positive perspective.”
— Yaw Acheampong; TV Producer: The Next 400 Talk Show

MALIBU, CALIFORNIA, UNITED STATES, June 26, 2020 /EINPresswire.com/ — While any group or country has its problems, many realize that America is still a great land that countless dream of coming to. And while some want to burn this country down, one immigrant from Africa wants to build it up–and he is doing just that.

Yaw Acheampong describes himself as a serial entrepreneur of fifteen years. He is that–but so much more. Yaw was born and raised in Ghana West Africa, where–according to Oxfam, roughly 60% of the people live on less than $1.25 a day. Feeling in his spirit he was meant for a better existence, like so many others, Raw came to America dreaming of building a great life. He arrived in October 1996 and has succeeded in doing just that.

Yaw states, “I've always been a true believer in America and the American people. I remember growing up back home, we used to joke around that America is only seven miles from heaven. Having lived here for the past twenty plus years, I share the sentiment even more.”
He adds, “And I know this country has the potential to be even better if we all learn to treat each other with respect and kindness and continue to demonstrate to the world what true diversity of America means.”

Unsure what to do with himself once in the U.S., Yaw saw a U.S. Navy commercial on TV on night. He was fascinated with the speed of the magnificent aircraft carriers plowing through ocean water, jet planes soaring in the sky, and taken by the slogan, "Around the world, around the clock.” Yaw picked up the phone and called the number on the screen. Within ten minutes, a navy recruiter knocked on his door, and the rest was history. Before he could think about it, he had enlisted. He served in the U.S. Navy for six years. Raw states, “The six years I served turned out to be the most humbling experience of my life. While it was not the easiest to say the least, I can also look back and say I had a wonderful time and enjoyed the privilege of serving this great nation.”

Fresh out of the military and keeping the promise to his parents to get a university education, Raw attended Old Dominion University in Norfolk, Virginia, obtaining a bachelor’s degree in economics. He then attended the College of William & Mary, achieving a Masters of Business Administration with a concentration in finance.

Dreaming of being in business for himself, and longing for the thrill of starting his own business, Yaw deliberately built his network, surrounding himself with the right people, and after multiple failures, finally got one of his businesses operating at optimum speed. After traveling to some of his favorite destinations including Rio de Janeiro, Brazil and Sydney, Australia, Yaw visited a friend in Houston, Texas; another city he came to love for its diversity and excitement. Knowing he was called to do something big, he determined to become a producer, making a new talk show that exemplified many of the positive things he loved about America, and that he longed for in humanity.

When asked about his mentors, Yaw reveals, "My biggest mentor is Joel Osteen, pastor of Lakewood Church in Houston Texas." Yaw continues, "I'm a staunch fan and believer in his messages of hope. He has taught me a lot about having the right mind set in times of trials and tribulation. I guess I always underestimated how wonderfully made we are as human beings, and the power we possess to bring about change to positively impact people's lives. We may not always have the financial means to help people in need, but we can always be very kind with our words and actions to help instill love and hope in people. I could be having the worst day ever, but Joel Osteen always has something in his messages that helps me put things into a much broader and positive perspective."

A History of Slavery

Yaw states that in 2019, he saw a lot of African Americans visiting Africa in celebration of the "Year of Return” in Ghana, which was a celebration of 400 years since the first African slaves arrived on the shore of the United States. Yaw says that while some were excited about visiting the land of their ancestry, there was also a bitter sentiment, especially among younger African Americans, who described themselves as "just being black, but not African." It was then that he decided to start a conversation in the format of a TV talk show called, "The Next 400,” which he says will “help this younger generation of African Americans better understand who we all are as a people.”

Yaw’s new TV show plans to reflect the challenge of betterment he hopes to see in America. "With 'The Next 400' talk show, Yaw says, "We will have conversations about the different countries and the people of Africa, discussing how slavery and voluntary migration have impacted the American continent for the past 400 years. We will also have a close look at all the areas where African slaves were shipped to during the transatlantic slave trade, especially the United States, South America, the Caribbean, and Europe, and track the generational progress black people have made including; culture, commerce, sports, music, and cuisine over the course of those 400 years. Most importantly, we will make declarations in the form of our vision statements for the Next 400 years, striving for greater equality and peace."