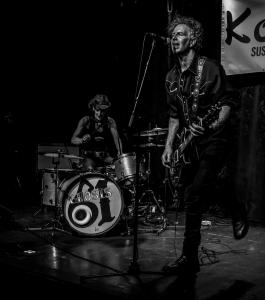 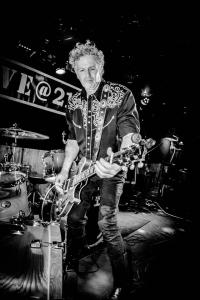 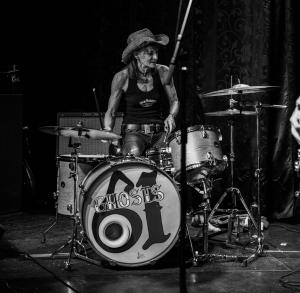 Life's simply too short to waste time being negative. It seems clear to me, if you put out good feelings and are helpful to others, it comes back to you. It's good to help others.”
— Joe Mazzari; 61 Ghosts

MALIBU, CALIFORNIA, UNITED STATES, June 23, 2020 /EINPresswire.com/ — Just south of Canada, beneath the Appalachian Mountains, and just north of the Atlantic Ocean, lies the haunted New England land of Maine; home to world-famous horror and ghost writer Stephen King, and home to rock and roll’s infamous own “61 Ghosts”—spawned from the ashes of The New York Dolls’ Johnny Thunders, with Joe Mazzari (vocals, guitar), and the thundering Mississippi Hill Country Blues rhythms of Dixie Deadwood on percussion. Together, they are America’s own “61 Ghosts,” one of the most unique bands of their style to emerge since ZZ Top crushed the world, taking rock and blues to a whole new level.

Playing original electric blues and rock and roll backed with a touch of punk spirit and folk rock rebellion, “61 Ghosts” has drawn in the admirers of all from fans of John Cougar Mellencamp, George Thorogood and the Destroyers, Bob Dylan, and Iggy and the Stooges to name a few.

With drummer Dixie Deadwood having performed for 15 years, and Joe Mazzari rocking for over 40, yet together as “61 Ghosts” for just several, the duo have still managed to rack up an impressive 200 plus gigs together under their belts and growing–across the U.S. and multiple continents. They have won over tens of thousands of satisfied fans, building a solid reputation as a great live band, and a guaranteed crowd-pleaser.

Singer/Songwriter/Guitarist Joe Mazzari’s early infamous bands include “The Daughters,” “Two Saints,” “Jerry Nolan” “ and “Walter Lure” of “The Heartbreakers,” as well as Jacknife Beat” and “The Joe Mazzari Band.” Joe was also a touring member of Johnny Thunders' solo band who he recorded three albums with among more. With "Johnny Thunders," Joe Mazzari also worked with legendary record producer Jimmy Miller, whose production credits included "The Rolling Stones," "Motorhead," and "Steve Winwood" among others.

Praised by Grammy Nominated Cedric Burnside, drummer Dixie Deadwood formerly played with electric blues legend "Leo ‘Bud’ Welch", among more. With Joe and Dixie together, “61 Ghosts” are nothing short of a masterful duo, ready to tour non-stop and rock the world like they provenly know how.

“61 Ghosts” debut album, titled “Mercy,” features the cult-classic “Black Cadillac,” an uproarious, rocking cut in the spirit of Steppenwolf’s classic “Born to be Wild–” both instant road-trip classics. Their latest single “Blindfold Love” rips in the similar vein, with Joe’s crushing guitar—sounding out of this world, and Dixies’ driving beats cementing this track as yet another new favorite. Flowing seamlessly from roadhouse tavern rock and blues to first-date worthy folk-ballads, the band lets loose with cuts including “Glimpse of You,” which compositionally harkens to Tom Waits and Leonard Cohen; a brilliant, heartwarming song.

Dixie states, “ I feel we are all energetic beings. Quantum physics states that everything vibrates and creates a frequency. Since we are all energy, then that must mean we can receive and transmit information at every moment, and that our thoughts are energy too. We truly create our life from what we think about daily. Fear is the worst vibration. It will hold you hostage and frozen in time.”

Joe states, "Life's simply too short to waste time being negative. It seems clear to me, if you put out good feelings and are helpful to others, it comes back to you. It's good to help others."

In a world of new challenges and pain, “61 Ghosts” are a classic, unique, and gracious band to fill your spirit with something beautiful and new.