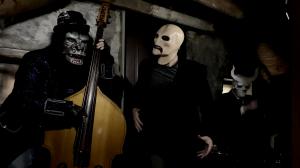 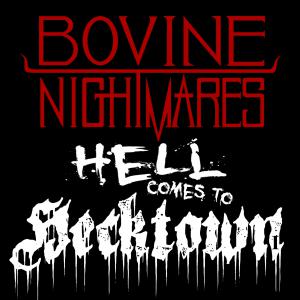 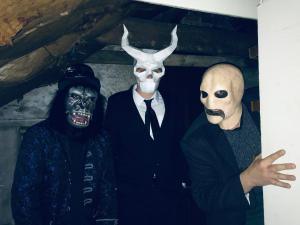 On “Giving Little Robots to Children,” they offer up reckless dynamism and delicious cultural sensory dislocations, as well as singularly imaginative music.

Avant-Metal three-piece Bovine Nightmares continues to assault the good people of Bethlehem, PA and the Northeast with their warped vision of dark riffs, maniacal crooning and growling, and time signature mayhem. Erikk the Broken, Steampunk Munky, and The Mighty Tavros have carved out a unique little spot for themselves with a sound that's akin to the Melvins, Faith No More, and Tom Waits, all handcuffed to the same radiator. They've been blending experimental and familiar soundscapes and rejecting the boredom of formula and compromise since 2019. But would it kill these guys to try to be a little more likable? Probably. "Giving Little Robots To Children" is the masked three-piece's latest single, and it's a free-for-all of mischievous and melodic horror.

Erikk the Broken channels each of his multiple personalities within the first 30 seconds of the first verse, over a primal stomp and chugging, squalling guitars. The song repeatedly shifts sonics and tone on a dime, and it's clear they've got the songwriting chops of a band that might normally take themselves way more seriously. It'll make you feel for any band who has to go on after these guys… or hang out with them. The bizarro double-time chorus evokes Mike Patton, or Sweden's high priests of rock n roll Ghost, if they cheeked and tossed their Ritalin. All the while, this choir of escapees from hell makes their graphic, often gory taunts and threats toward us mere mortals somehow totally sing-along-able.

The weirdly cute, but mostly upsetting clip for "Giving Little Robots To Children" features quite the cast. An unhinged drifter repurposes his cardboard signs ala "Subterranean Homesick Blues," and stuffs steel gears into his mouth through a pretty enviable, luxurious beard. A classroom full of young, googly-eyed robots sits through an educational film straight out of the beginning of 28 Days Later or the end of A Clockwork Orange. And oh yes, Munky, Tavros, and Erikk make an appearance, in their "dapper simian," "Baphomet skull," and "melting gimp" headgear, respectively. The whole thing wraps up with some hallucinogenic asylum visuals, complete with straight jackets and padded rooms, as well as an ominous sign-off from Wargames' supercomputer WOPR. That's just Bovine Nightmares, always keeping things light.