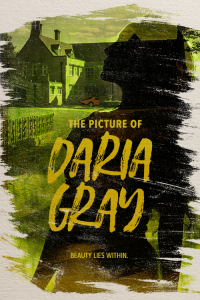 Auditions for "The Picture of Daria Gray," originally scheduled for March 20 and 21, will be rescheduled for later this year.

Production of “The Picture of Daria Gray” is still greenlit and filming will still happen this year — at a time when there are no longer any public health concerns surrounding the COVID-19 infection.”
— Kirk Zeller

FREMONT, NE, UNITED STATES, March 18, 2020 /EINPresswire.com/ — Following the latest reports from the World Health Organization (WHO) and the Centers for Disease Control and Prevention (CDC), as well as recommendations from the State of Nebraska, the City of Fremont, and Dodge County, Wonderphil Entertainment and Silicon Prairie Center, producers of “The Picture of Daria Gray,” today announced that auditions originally scheduled for this weekend, March 20-21, for the film have been postponed.

“We are deeply grateful for the overwhelming interest and response we’ve received for our film and these auditions,” said Kirk Zeller, founder of Silicon Prairie Center and one of the film’s producers. “We recognize all the hard work that goes into preparing for an audition, and we understand that many will be disappointed by this delay. Production of “The Picture of Daria Gray” is still greenlit and filming will still happen this year — just at a time when there are no longer any public health concerns surrounding the COVID-19 infection.”

Eastern Nebraska Film Commissioner, Stacy Heatherly, has been in regular contact with State and City officials throughout this film project, and will remain in communication with them as the public health situation continues to develop. Stacy will coordinate with the film’s production team to identify and arrange a suitable time and place to hold auditions later this year. Additional information and details will be released as they become available.

“We find ourselves in an unprecedented situation with this health crisis,” said Mary Douglass of Mid America Artists. “The health of those attending the auditions, as well as our team members, is our number one priority. Despite our most diligent efforts to find safe alternatives for holding auditions as scheduled, the possibility of anyone’s health being put at risk was a chance we were simply not willing to take. We look forward to rescheduling the auditions for a time in the not-so-distant future.”

As we all continue to feel the increased impact of the coronavirus (COVID-19) pandemic, we encourage you to consistently take measures to “flatten the curve” and find ways to take care of yourself, your family, and your neighbors, as well as the industries being hard hit. Some ideas include:

• Practice social distancing as recommended by the CDC but avoid feeling isolated by picking up the phone and calling a friend, loved one, or a neighbor. You’ll both be glad you did!
• Consider a no-contact drop-off delivery from local restaurants and businesses — and don’t forget to tip well.
• Purchase gift cards or certificates online for future entertainment outings when social distancing is no longer the norm.
• Check in with your neighbors—especially the elderly—to see if they need anything or just talk with them for a few minutes.
• Don’t lose your curiosity and desire to learn about other cultures and places, even if your tour bus is your couch. There are many virtual tours, webcams, live streams, and webinars available on a wide range of topics — a quick Internet search will give you a ton of options.
• Remind yourself that this is temporary and try not to panic. Maintaining a regular daily schedule, eating a healthy diet, and incorporating physical activity into your day will do wonders for your mood and overall health.
• Stay informed, as the news changes on a regular basis, by checking in with trusted sources like the World Health Organization, the Centers for Disease Control and Prevention, and in Nebraska, the University of Nebraska Medical Center (UNMC.)
• When you feel overwhelmed by all the news, take a break from the headlines and do something that soothes you and/or engages your creative side — write a poem, read a book, recite lines from Shakespeare, play some music and dance or sing along (or both!), pull out your crayons and color, play a board game with your family, or just cuddle up with the furry members of your household.
• Be kind to yourself and others.

Stay up to date on the latest developments related to auditions and filming of “The Picture of Daria Gray” by liking and following our Facebook pages:

About “The Picture of Daria Gray”
The film is based on “The Picture of Dorian Gray” by Oscar Wilde. In this modern-day adaptation, Daria Gray is a beautiful, aspiring actress. She meets August, an artist who paints her portrait. The years pass but Daria doesn’t seem to age as she claws her way to the top of Hollywood. Then she notices something that will forever alter her life: The portrait is changing. It reveals an aging Daria. Now this timeless beauty locks away the portrait as she attempts to continue her career.