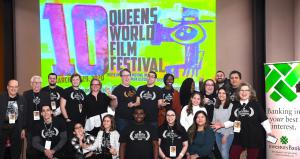 Preston and Katha Cato (second from far left and far right) with the team of volunteers who handle the many duties needed to create the 10th Annual Queens World Film Festival. 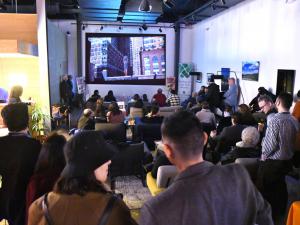 Indie filmmakers and their friends recently viewed trailers of films from the 10th Annual QWFF at The Local NYC in Long Island City. 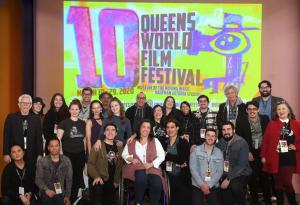 Filmmakers from NYC, across the USA and many nations will have their films streamed to an local and global audiences by DISCOVERED.TV.

We are grateful to DISCOVERED.TV for providing their free, online platform to make our film screenings possible, and for making us the first International Film Festival to stream live on their site.”
— Katha Cato, Executive Director of Queens World Film

QUEENS, NEW YORK , UNITED STATES, March 18, 2020 /EINPresswire.com/ — In light of the global pandemic, the 10th Annual Queens World Film Festival (QWFF) will open Thursday, March 19th, on DISCOVERED.TV, screening 220 films from 32 nations. Opening Night of the Festival, presented by Investors Bank, will begin at 7 PM/ EDT on Thursday, March 19th at https://discovered.tv/profile?user=QueensWorldFilmFestival. The Opening Night Block is called “Tales of Connectedness” and features six short films from Iran to Brooklyn, that remind us that we are all part of each other, whether we like it or not—an extremely timely and poignant message amplified by our current health situation.

In announcing the live streaming, Katha Cato, Executive Director of the Queens World Film Festival, said, “From the beginning of time we have gathered together around the flickering lights in our darkened caves to share our stories. Although the flickering lights have become zeros and ones, we’ve changed the nature of our caves, but the impulse to gather endures. In these times of crisis, it is even more important that we gather around the humanity provided in film. We are grateful to DISCOVERED.TV for providing their free online platform to make our film screenings possible, and for making the 10th Annual Queens World Film Festival, the first International Film Festival to screen on their site.”

“We developed DISCOVERED.TV to give creators a global alternative distribution source for Music, Film and TV,” said Charles Pankey, Co-Founder, DISCOVERED.TV “We are delighted to launch the DISCOVERED Film Festival channel with the Queens World Film Festival in way that enables them to celebrate their 10th Anniversary through our platform. This pioneering effort will set a new standard for film festivals worldwide.”

QWFF Artistic Director Preston Cato, explained “We have selected 200+ incredible films from around the globe. We literally have something for everyone!" He continued, “Expect to be delighted by cinematic treasures presented in thematic blocks from filmmakers residing from all over the globe—yet all engaged in similar conversations.”
View the Queens World Film’s “Sizzle Reel” by clicking here.

This year’s Festival submissions reveal an increased concern for the weakest among us and the future of our planet, but some of them have been cut with a wickedly funny double-edged sword. After reviewing almost eight-hundred films entered from sixty-one nations, QWFF programmers selected two-hundred and twenty remarkable films from thirty-two nations. This includes forty-three films by Asian filmmakers, eighty-four by women, twenty-four from Queens, twenty-six from Brooklyn and ten by children participating in the Festival's education program. The entire festival is programmed thematically in BLOCKS, grouping complimentary films together for a specific cinematic experience. BLOCKS titles include Women’s Voices, Twisted Love Stories, Kid’s Corner and with three BLOCKS dedicated to LGBTQA-themed films from across the globe.

Ms. Cato wants prospective festival attendees to understand that QWFF is all about “heart and guts,” and features maverick filmmakers of all orientation, ethnicities, countries, and cultures. She explained, “QWFF is committed to making sure both creative expression and a passion for truth is alive and well. At least in Queens.” She continued, “This is a tough time on and for our planet. Now is the time hold up a mirror to show us who we are, what we have done, and who we could be.”

The official QWFF app, Event Meow, is available to encourage audiences to interact with filmmakers, festival personnel and sponsors, in real time. QWFF Passes, Packages and Single Program tickets are being refunded via MoMI or Brown Paper Tickets.

In addition to the annual festival, QWFF includes year-round screening opportunities for QWFF alumni, special events to bring the Indie film community together, industry networking events, and an educational initiative for youth and seniors.

Festival Sponsors include Investors Bank, Kaufman Astoria Studios, Queens Council on the Arts, Queens Economic Development Corporation, I love NY, Resorts World, with several hotels in Queens that are offering discounts to the visiting filmmakers and their guests – including the Paper Factory.