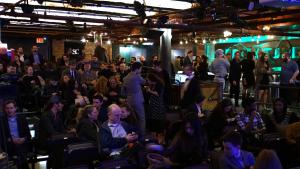 The final film line-up of the 11th annual New York City Independent Film Festival is ready! From May 10 to May 17 this year, the festival will screen 200 films.

The place to be if you are that independent filmmaker looking for support”
— Dennis Cieri, festival founder

“NYCIndieFF is the place to be if you are the independent filmmaker who makes great movies and wants to meet other indie filmmakers to expand their network and knowledge. We have built that community and we offer these tools and resources to passionate filmmakers to navigate the world of cinematography,” says Dennis Cieri, the founder and director of the New York City Independent Film Festival.

Since 2010, the New York City Independent Film Festival has screened over 1,800 movies from 81 countries across the globe. For over a decade, it helped hundreds of talented domestic and international filmmakers and actors showcase their work to the world.

“Our festival focuses on low budget films and emerging yet overlooked indie filmmakers, honoring the best works in numerous categories at the finishing Awards Ceremony,” says Cieri. “At the same time, NYCIndieFF gives filmmakers the opportunity to network with a community of kindred spirits and interact with press, supporters, and fans.”

And those fans are the vital part of the festival! NYCindieFF is not just an industry gathering, but an exciting, behind-the-scenes event for the fans. If you enjoy watching films and then hear the inspirations and true life stories behind them, this festival is your perfect hangout for the week. Filmmakers enjoy hearing what their fans think—and fans enjoy discussing their impressions with filmmakers. “Where else do you get so close to over 200 filmmakers directors, actors, scriptwriters and producers from all around the world?” Cieri points out. “We are proud to have these unique social opportunities at NYCindieFF.”

The socializing starts Sunday, May 10, at the opening party at the Producers Club Theatre in the Times Square’s famed theatre district. The festival runs until Sunday, May 17, wrapping up at the Awards Ceremony and Closing Party. Discounted Full Festival Passes are available here until April 1, 2020. Festival-goers can buy tickets online or at the door, depending on availability. For press passes please email your credentials to info@nyciff.nyc. Our sessions do sell out, so don’t wait too long!