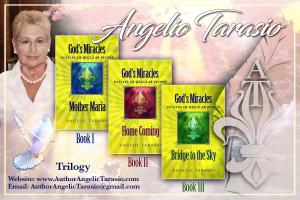 We should value Life and Love, as greatest gifts from Above. Miracles happen in lives of regular people, when we make the most of both treasures through perseverance, loyalty, courage and compassion.”
— Author Angelic Tarasio

PALM BEACH SHORES, FLORIDA, UNITED STATES, February 26, 2020 /EINPresswire.com/ — The Universe blesses people with love and parenthood. It is parental responsibility to lovingly develop children physically, spiritually and psycho-emotionally strong that enables them to succeed in modern life with the knowledge of the rule: “Life is not only fun, and fun is not life.” Escalated suicide of Americans between 10 and 34 years of age is the 2nd leading cause of death. What does it mean? The young generations are not introduced to this rule. There is a way to correct it, and trilogy shows how to do it.

“God’s Miracles in Lives of Regular People” is real life and love story of Countess Maria Kurbatov. She went through hell on Earth, and thanks to love and faith, she survived with three children. Nothing stopped Count Alexander Kurbatov from crossing borders at horrible time of WWII. He kept in mind one thought – his beloved Marie is in danger, and love gave him courage, strength and wings. The scars after tortures in concentration camp, mutilation and cruelties caused by KGB did not extinguish their passionate love.

Book I: "Mother Maria" introduces readers to a noble Ukrainian family in Eastern Poland at the beginning of the 20-th century. WWII destroyed peaceful life of Mademoiselle Marie after her graduation from Sorbonne University and engagement in France to Count Alexander Kurbatov. Merciless war brought Maria to concentration camp in Nazi Germany. Thanks to interference of the Divinity, Maria was rescued by true love of her fiancé, who arrived to save his bride. Maria concluded, “Nobody has power to kill Faith and Love.”

Book II: "Home-Coming" brings readers to illegally annexed territories of Eastern Europe by the USSR. In 1946, parents-to-be Maria and Alexander Kurbatov arrived in Ukraine to rescue Maria’s family from cruelty of communist regime of the USSR to nobility. The readers discover Kurbatovs’ hardships in GULAG for political prisoners and exile in Siberia due to criminal actions that NKVD/KGB implemented to Kurbatovs. Their son Sasha was born in prison. His father met him after discharge from GULAG, when Sasha was 10. Maria’s and Alexander’s love brought another child into this world. Alexander’s devotion to his family arose him to battle with KGB. He paid big price for Maria’s and his sons’ permission to leave Siberia.

Book III: "Bridge to the Sky" gives the readers the experience of continual persecution of Maria and her sons by KGB. In Ukraine, Maria met an honorable man who fell in love with her. He tried to protect Maria and her boys from KGB hunting. Their daughter was born. After years of threats, losses of beloved, poverty and homelessness, the readers find, how Maria’s faith and courage led her to miraculous resolution of unbearable life existence. Read to learn in what miraculous way Maria got into the Kremlin to meet Leonid Brezhnev, a new leader of the country. She liberated not only her children and herself, but many other innocent people. She brought exoneration to her beloved.
Maria recorded life events in journals and requested her daughter-in-law Angelic Tarasio to write a motivational story about God’s miracles that can work, as an effective remedy for broken hearts, physical and mental breakdowns, depression, and suicide.

Based on life examples of main characters, all three books are related to vitally important topics of current life, such as:
 Identification and acknowledgement of value of human life;
 Uplifting of human relationships – love, trust and commitment;
 Recognizing the moral responsibilities of parenthood;
 Upbringing the children with comprehension of importance of their life and responsibilities;
 Strengthening the connection with the Divinity, as the source of eternal wisdom and miracles;
 Making choice to survive under any devastating life circumstances instead of suicide;
 Understanding that the ideas of socialism and communism are utopic and demoralizing that was proved by history and miserable existence of population in many socialist countries.

Author Angelic Tarasio was born in the Ukraine. She was blessed to study and work successfully in different fields. Angelic obtained diplomas and degrees in traditional and holistic medicines and teaching.

The author considers her friendship with Mother Maria, as blessing from Above. Angelic’s parents were military officers in the USSR and atheists. Mother Maria brought Spirituality and Compassion into the life of her daughter-in-law. Philanthropy became part of Angelic’s life.

The first book “Mother Maria” was published in 2008, during Global economic, financial, real estate and ethical downturn. Millions of people bankrupted, lost their assets, companies, homes, job positions, as well as respect in their families. The number of suicides jumped up to the sky. The researchers found that the rate of suicide between 2008 and 2010 escalated four times faster than it did in eight years before the recession. (Web site of the medical journal ‘The Lancet’) Those readers who read the book “Mother Maria” attended author’s book-signings and expressed their gratitude for support that the book gave them and their families during Global crisis.

In 2009, Angelic Tarasio received phone call from Mel Gibson, who read her first book of trilogy and complemented author’s vivid imagination in descriptive writing. He saw the possibility to make a movie out of a book. At that time, Angelic was finishing with writing of the second part of trilogy. She decided to complete the trilogy, and now, she hopes that the Universe will send her right producers, who will make mini-series movies out of her work.

To schedule the interviews, book presentations and book-signings email: AuthorAngelicTarasio@gmail.com

For more information about the author and book purchasing: www.AuthorAngelicTarasio.com