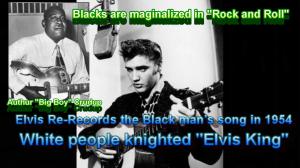 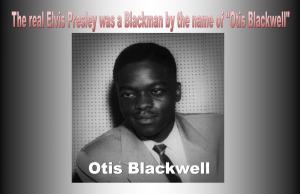 Otis Blackwell wrote many of the Elvis hit records like “Heartbreak Hotel.” Elvis copied this style from Otis Blackwell. Elvis did not create the songs he just copied much of his music from Blacks who were never given credit. There is no Black Inclusion in Memphis. 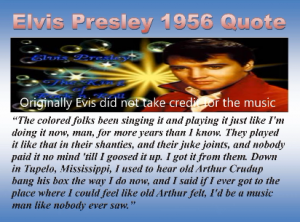 While Elvis Presley’s own words clearly state that he got his music from Black people., Black music, culture and history is not inclusive of the Memphis Elvis culture. Only Elvis is King and the people where he got the must is not honored.

The colored folks been singing it and playing it just like I'm doin' now, man, for more years than I know. They played it like that in the shanties and juke joints. I got it from them.”
— Elvis Presley Charlotte Observer, June 26, 1956

MEMPHIS, TN, UNITED STATES, February 24, 2020 /EINPresswire.com/ — It is Black History month in America. Memphis African/American Filmmaker Anthony "Amp" Elmore Celebrates Black History Month Via a new Film Pre-production "Rock and Roll A Black Legacy." Unknown to the "Outside world" there exists a "Whisper and Culture" among Memphis African/Americans to willingly subordinate to the unwritten rule and remain silent about the "Memphis White Supremacist Elvis Culture." The song in the movie; "Elvis Presley Boulevard" tells the untold story of the deep and most segregated part of Memphis. The lyrics say "If you want to see a part of Memphis where you see White Supremacy, where Blacks and Whites are far apart let me show you Elvis Presley Boulevard."

While the film is not about Elvis Presley the script does present an interesting " African/American Elvis Twist." Alan Freed the White Cleveland Ohio disc jockey who coined the term "Rock and Roll" introduced "Rock and Roll music as a vehicle for social equality, diversity and integration. This story shares the the conflicting African/American prospective regarding the dichotomy of Elvis Presley. The film denotes how racism and White supremacy not only appropriated Rock and 'Roll music the film points out how it was racism and White Supremacy that really killed Elvis.

Memphis African/American Filmmaker Anthony "Amp" Elmore wish he could do the film "The Black Side of Elvis." Elvis childhood Black friend in Tupelo, Mississippi Sam Harris details a Black side of Elvis Presley. Elvis love for banana sandwiches and much of his culture came from his living as a White Child accepted as a Black Child in Tupelo, Mississippi. The film points out; "whereas all of those White people who claim to love Elvis were the people who actually Killed Elvis Presley."

Orange Mound was segregated and had the W.C. Handy Theatre where Blacks would perform. Elvis would watch the performers at the Handy theatre. The first performance of Ike Turner and Jackie Brenston 1951 Song "Rocket 88" was held in "Orange Mound."

Elvis Presley true History as a child in Tupelo and as a teenager in Memphis, Elvis hung around Black people so much that Blacks once called Elvis; "One of us." Elvis Aaron Presley whose untold story is in reality should have been America's greatest example for integration in America. White racism and White Supremacy would later turn Elvis Presley into the greatest tool in the 20th Century of racism and "White Supremacy.

This film in a natural way tells the story of "Stax Records" that would later become a Black owned company was destroyed by racism and White Supremacy. One of the songs in the movie is "Stax was too Black."

The film notes that Black music was the life of Elvis Presley. Elvis had to segregate away from the resource of African/Americans that kelp his spirit moving. Soul singer James Brown was a dear friend of Elvis whereas James Brown would spend nights at Graceland and they would sing Gospel music. Elvis could not take a picture with James Brown or let White America know that he was friends with the "Soul Brother Number One" James Brown.

In 1956 at height of racial segregation in America Elvis went to the Mid-south fair on "Colored Night" in Memphis. Many of the African/American singers were heroes to Elvis. Elvis childhood friend Sam Harris explained in a 2016 interview that he feared that people would not understand his friend Elvis Presley.

Unknown to America that while White Memphis prides itself on Graceland and Elvis Presley Tourism, African/Americans have an underlying dislike for the Elvis Presley culture and find the Memphis Elvis White Supremacy culture despicable.

African/Americans in Memphis understand that anyone who questions the "Authenticity of Elvis Presley" could lead to loss of job or income, intimidation, possible imprisonment or loss of life. This film shows the untold story of "White Supremacy and how it affects the African/American Community. Elmore explains it is like laughing when a subject is not funny.

Graceland the home where Elvis Presley for African/Americans is tantamount to the 1939 movie "The Wizard Oz." The Wizard of Oz premiered on television in 1956. Just as there were no Black people in Oz Graceland in regards to Black people is a "White Folks Fantasy." One of the protest songs in the movie is titled "Ain't no Niggers in Oz." The song is a parody denoting how White Graceland is. The lyrics say; "White Folks spend millions to see Graceland in Memphis, Tennessee Niggers wouldn't go if the tickets were free."

The film explains Graceland for Blacks as America's 2020 "Apartheid in Memphis." The word among African/Americans in Memphis is to remain silent about "Graceland and the Elvis White Supremacist Culture." President Donald J. Trump in November 2018 awarded Elvis Presley the"Presidential Medal of Freedom." President Trump sent out a message to those who questions the authenticity of Elvis when he repeated Elvis Presley is the "True King" of Rock and Roll."

Anthony "Amp" Elmore is Memphis, Tennessee's 1st Independent Theatrical Filmmaker. Elmore explains that it is "White supremacy & Racism" that he is not known and respected in his home town of Memphis, Tennessee as the 1st Independent Theatrical Filmmaker. In over 33 years of producing our movie "The Contemporary Gladiator" in 1989 Elmore has never been invited to anything "Film Related." They have this "White Boys Club" whereas they marginalize you because you are "Black."

Elvis Got His Music From Copying Blacks