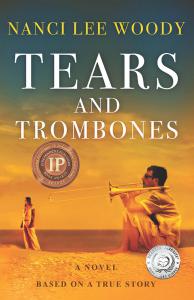 I don’t know how much time passed before everybody stood up and started clapping again and yelling, “Bravo! Bravo!” Everybody except me. I just sat there in a daze, staring at the musicians.

One trip to the symphony and I knew what I wanted to do.

I had begged unceasingly to see Tchaikovsky’s concert after Maurice, the turd in fifth grade, said they’d never let “barefoot, fruit-picking trash” like me into any concert hall.”
— Nanci Lee Woody, Tears and Trombones

SAN MATEO, CALIFORNIA, USA, December 10, 2019 /EINPresswire.com/ — I clearly remember the day my mother took me to the San Francisco Symphony, even though she had to scrimp and save for every penny to put food on the table, even though she had never been to a concert in her life, and even though she was nervous about driving on those spine-curdling hills in the City. I had begged unceasingly to see Tchaikovsky’s concert after Maurice, the turd in fifth grade, said they’d never let “barefoot, fruit-picking trash” like me into any concert hall.

So Mom, feeling sorry for me, braved those hills and when we stopped in awe at the beauty of the War Memorial Opera House, she said she felt it was all worth it. Inside, Mom held my hand, walked and read all at the same time.

“After intermission they’re performing Tchaikovsky’s Violin Concerto in D Major. That’s who you wanted to see.”

“I’m not sure,” she replied. “Let me read some more.” She frowned. “It doesn’t say a thing here about D Major, but it says that Tchaikovsky was a Russian composer from the Romantic era.”

“That’s who writes the music.”

“What does the Romantic era mean?” I was upset, not knowing so many things.

Mom was a little short with me when she said, “I told you I’ve never been to a symphony concert before. These program notes don’t tell us everything.”

“But did Tchaikovsky play the violin?”

“He started piano lessons when he was only five.” She shook her head like she didn’t believe it. “Goodness.”

“How come he wrote music for the violin, then?”

She put her finger over my lips. “You can just stop asking questions.”

After she read a little more, she said, “Look, son. Here’s a picture of the man who’s going to be playing his violin.”

“That looks like a fiddle. Is it the same thing?”

She ignored my question. “If you’ll listen, you can hear inside they’re playing Mozart’s music right now. And we’re having to sit out here in the lobby and miss it.”

“Is Mozart in there?”

“I don’t see how he could be, since he was born in 1756.” She laughed. “There’s a world of things to learn, Joey. Like this, for example.” She pointed to her program. “Mozart was a child prodigy.”

She read a little bit more trying to find the answer before telling me that Mozart at six years old could play blindfolded and with his hands crossed over. She also read that Mozart composed his own music when he was just nine years old, my age. I didn’t see how that could be and said so.

Finally, the music inside ended and people came pouring into the lobby. Mom grabbed my hand. “We can go in now.” A woman who said she was an usher looked at our tickets. “Is this your first time at the symphony?” she asked.

Mom blushed and nodded. The usher touched her arm and led us to the very front row. “These seats aren’t taken. You sit here with your boy.”

After a while, there must have been a hundred people on the stage. “Look at all those fiddles,” I remarked.

I was surprised to see so many different sizes of violins, some so big the men had to stand beside them and hold them up. And there were all kinds of strange-looking horns and drums.

The squawky noise they were making didn’t sound too good. I thought maybe Mom was right and I wouldn’t like the concert after all, but I didn’t tell her that. Maurice the piss-pot had said Tchaikovsky would be here, but he wasn’t, since he was dead, too.

My thoughts were interrupted with the sound of clapping as a man carrying a violin walked onto the stage. The audience got quiet as he turned to face the orchestra and motioned to a man with a strange-looking black horn to play a note while he tried to copy it. That didn’t look too hard to me, but it must have been important because when he was satisfied he’d got the note right, the rest of the instruments with strings had to try. When they all hit the same note, the strange black horn sounded again, and the other horns had their turn to try to copy the note. If this was what a concert sounded like, it was pretty boring. The first guy who started this whole thing sat down and another man with a violin came onto the stage and the audience went wild. I didn’t understand what all the clapping was about as nothing had happened besides that one note being played over and over again.

When the audience settled down, a man dressed in a long black coat with tails on it walked to the center of the stage and bowed several times. Everybody clapped all over again for a long time and still there was no music.

“That’s Pierre Monteux,” Mom said. “He’s the conductor. And before you ask, he’s the leader of the orchestra.”

Finally, the conductor turned to face the musicians, raised his stick and when it came down the orchestra began to play so softly at first that I could hardly hear them. I was confused and didn’t know where to look or how to listen to the different sounds coming from all around me. When the man with the violin began playing, I thought it must be the sweetest sound anybody ever heard. The breath went out of me. Everything but that music was shut out of my mind.

I don’t know how much time passed before everybody stood up and started clapping again and yelling, “Bravo! Bravo!”

Everybody except me. I just sat there in a daze, staring at the musicians. Mom shook me and asked if I was all right. She pulled me to my feet as the San Francisco Symphony played The Star Spangled Banner. I could feel the music come into my chest as the horns sounded the melody of the rockets’ red glare and I knew right then what I wanted to be some day. I wanted to be somebody really special, somebody just like that man who played the violin.