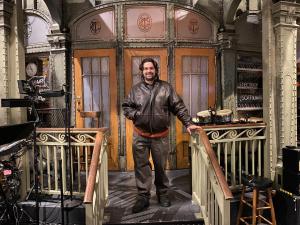 NEW YORK CITY, NY, USA, December 10, 2019 /EINPresswire.com/ — Comedian John Belushi is a New York icon, having made his initial fame as a member of Saturday Night Live’s original cast, which turned late night TV on its head in the ‘70’s. Nearly 45 years after the show’s debut, actor Jack Zullo (“Bell Canyon,” “Epic Rap Battles of History”) brings Belushi’s story to life on the Off-Broadway stage at Theatre 80 (80 Saint Marks Place, NYC) in a multimedia production that is as riveting and raucous as the man himself.

Synthesizing his own fascination with Belushi with his background as an actor, writer and filmmaker, Zullo has created an honest portrayal of the icon that is connecting with audiences. Garnering an impressive Show-Score rating of 72, the audience members themselves have described With A Little Help… It’s John Belushi as “ambitious,” and that Zullo was, “amazing,” and that he, “inhabited the spirit of John.” Jim Belushi himself saw the show in an earlier run and was impressed that Zullo had, “captured the spirit of the time,” and said, “I loved how aggressive you made John on stage.”

WNBC-TV’s “Weekend Today In NY” recently featured Zullo in studio for a sit-down interview with anchor, Michael Gargiulo, who was impressed by the scope of Zullo’s commitment to this and proclaimed, “what a project!” Zullo was later given a private tour of the SNL studio where Belushi made his initial fame.

With A Little Help… It’s John Belushi plays at Theatre 80 through December 22. Tickets are $30 – $40 and are available at www.withalittlehelpshow.com.