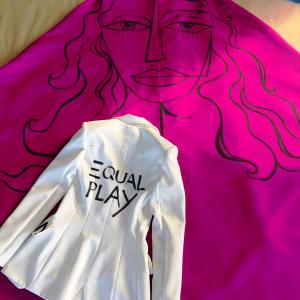 The finished Christian Siriano jacket and train with Mizrachi design 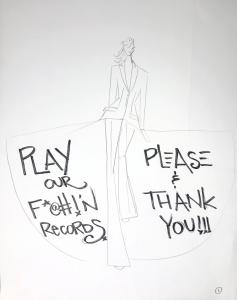 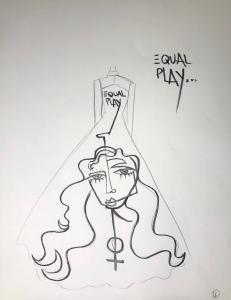 Nettles and Mizrachi chose the images to make a bold statement at the CMA awards.

This is a beautiful case of women supporting women across industries, she in the country music world, and I’m in the visual arts world.”
— Alice Mizrachi

BROOKLYN, NEW YORK, UNITED STATES, November 14, 2019 /EINPresswire.com/ — The Bronx, NY – Nov. 14, 2019 – Singer Jennifer Nettles made a bold statement at Wednesday night’s Country Music Awards, with a big assist from artist Alice Mizrachi.
Nettles, a presenter and performer at the 53rd Country Music Association Awards in Nashville, hit the red carpet wearing an elegant white pants suit trailing an oversized pink train that she threw open to reveal the message “Play Our F*@#!N Records” under her right arm, and “Please & Thank You!!!” under her right.
The train carried another message on the back – “Equal Play!” atop a classic Mizrachi Earth Mother drawing, with the female symbol underneath, mirroring one of Nettle’s right pants leg.
Nettles’ outfit, by designer Christian Siriano and accented by Mizrachi, called out the male dominated country music radio stations for not playing more records by female artists, and in that way limiting their exposure and income.
The statement was heard, loud and clear.
“Jennifer Nettles Is A Boss In ‘Equal Pay’ Power Suit On 2019 CMA Awards Red Carpet,” read the Billboard headline.
“Jennifer Nettles Calls On Industry to Play Women’s ‘F-ing’ Records With Statement Outfit at CMA Awards,” Bonnie Fuller wrote in her Hollywood Life column.
In an article praising Nettles’ outfit, People Magazine cited a recent study by Dr. Stacy L. Smith and the USA Annenberg Inclusion Initiative that between 2014 and 2018 only 16 percent of the top 500 country songs were by women.
Studies show that more radio airtime can increase sales, even for those songs that are not instant hits.
“This is a beautiful case of women supporting women across industries, she in the country music world, and I’m in the visual arts world,” Mizrachi said. “When I researched her I found that our vision is aligned.”
Nettle’s called Mizrachi a week before the event. Though they have never met, Mizrachi said Nettles told her she knew Mizrachi was a big advocate for women in the arts.
Nettles told the artist Mizrachi she had followed Mizrachi’s work empowering women in the arts. “She said she has been a fan of my work and enjoyed my focus on the positive action rather than just complaining about it.”
Now Nettles wanted Mizrachi to help her create an outfit for country music’s big night that would “make a statement.”
“She wanted the train so she could throw it open on the red carpet,” Mizrachi said. “She wanted the back to say ‘Equal Play’ to request a call to action to the industry, to tell country music executives we want you guys to play our records equally, because women in country music are underrepresented on many levels.”
The outfit arrived on Saturday and Mizrachi worked on it for three days and shipped it back
The rest is CMA history.
“I love it,” Mizrachi said of the project. “This is a beautiful case of women supporting women across industries. She is in the country music world, I’m in this art world where I’m working in public spaces. Here she is following me over the years and saying I love her vibe, I want to someday work with her, and finding a way where she can match her vision of making a statement with my art, even though they are from two different worlds.
“It’s fabulous!” Mizrachi said. “Here we are, two women who are clamoring positive messages to get out voices heard and uplift other young women, working toward the same goal in different industries and really appreciating each other for doing that work.
“It opens my world to her world and cross pollinates our work in industries where oftentimes women are not given access,” Mizrachi said.
“How brilliant is that!”