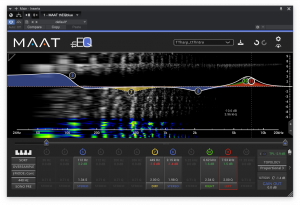 thEQblue – A dozen precision variations on “analog,” all in one EQ 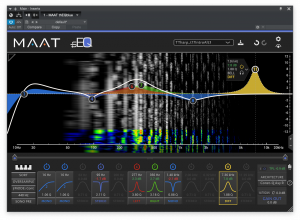 Beautiful analog architectures that will take your work out of the ordinary.

I dig it, and would highly recommend it to anyone who may struggle with the use of plugins where they were wanting to use hardware before.”
— Michael Romanowski, Coast Mastering

Available for both Windows and macOS, thEQblue builds on the proven foundation of Algorithmix’s groundbreaking original, while bringing that reference quality into the 21st Century. thEQblue is a collection of twelve minimum phase equalizer architectures employing proprietary 80 bit floating point algorithms and sophisticated signal windowing to create a broad palette of exceptional sound qualities and characters.

For Stephan Mathieu, owner of boutique Schwebung Mastering in Bonn Germany, thEQblue fulfills an unmet need. “Working all day with plugins since ’96…something I’ve learned quickly is that I don’t want to use most of them.” MAAT ’s thEQorange immediately became his “unrivaled” EQ for critical work, and “…now that I’ve added thEQblue to my strictly selected palette of ITB (In The Box) processors, I can say that I’ve found my absolute dream team. So very well done.” Michael Romanowski, known for his high resolution analog and digital work at Coast Mastering in Northern California, came to virtually the same conclusion. “Very well done MAAT! I dig it, and would highly recommend it to anyone who may struggle with the use of plugins where they were wanting to use hardware before.”

The plug–in is delivered in all modern formats, including cross–platform AAX plus VST 2 and 3 as well as AU for macOS. Sample rates up to 384 kHz are supported for production and post of HRA and game audio workflows. Perpetual licenses for thEQblue are available in two forms, exclusively from MAAT. thEQblue6 offers six popular series equalizer architectures, while thEQblue12 extends the license to include the entire set of all ten series plus two parallel architectures. Two entry level versions with essential features, SantaCruzEQ6 and SantaCruzEQ12, offer the same high fidelity EQ engine as thEQblue. Images and additional information, including user manuals and videos, are accessible anytime at www.MAAT.digital on the web.