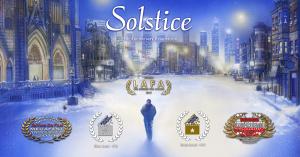 CHICAGO, IL, USA, October 21, 2019 /EINPresswire.com/ — After losing his leg in a tragic accident in 1986, Chicago native and filmmaker Jerry Vasilatos, was able to overcome his setback and in 1993 go on to fulfill his dream writing, producing and directing the touching holiday drama “Solstice”. The film went on to be a huge success and was broadcast into millions of households as Lifetime Television's Original World Premiere Movie in 1994. This year, the newly restored edition with a brand new orchestral score to celebrate the 25th Anniversary has garnered nominations and awards including Best Drama and Best Score at the Action on Film Megafest, Hollywood Dreams International Film Festival, Los Angeles Film Awards and Los Angeles Independent Film Festival. The restored director's edition, along with 140 minutes of bonus content including newly produced behind the scenes programs, commentary tracks and foreign subtitling in French, German, Greek, Russian and Spanish, is available for pre-sale in a limited edition of 500 copies on Indiegogo at: https://igg.me/at/solsticebluray/x/13077443#/

Harkening other perennial Christmas classics like "It's a Wonderful Life" and "Mr. Krueger's Christmas", the film deals with personal seasonal introspections as relevant today as they were 25 years ago." I hope the message of the story helps provide some hope and comfort to audiences during their own reflections on what the holidays should be about" said the director. "The film was restored after scanning the original camera negative in 2K and the sound mix recreated from the original reel to reel elements. Along with composer Balint Sapszon's new score recorded by the Budapest Scoring Orchestra, the film looks and sounds better now than when it was originally released. The limited edition Blu-Ray will make for a great holiday gift, or for viewing with family and friends."

Vasilatos funded Solstice with proceeds from a personal injury settlement that he had received after his accident. “Back in 1992, I decided to take my settlement and produce a project of my own,” he recalls. Set in frigid, mid-winter Chicago, the film tells the story of Nick Allman (Michael Kelley), a disillusioned young man who encounters a variety of characters that help him regain a sense of hope and optimism during a lonely Christmas Eve. Vasilatos went through some tough times – even losing hope – just like Nick in the film, whose character was inspired by the true events and emotional struggles in Vasilatos’ life at the time. Today Vasilatos has turned tragedy into triumph even going so far as to invent a device made to provide greater mobility for other amputees, cane and crutch users in need of temporary or permanent support called the EZ-Walk. The director's next feature film project, "Shelter Me" has also won awards in several scriptwriting competitions and also placed as a semi-finalist in this year's Slamdance. It is being developed with Chicago Media Angels and Cinespace Studios, with a quarter of first money commitments in place towards the budget.

With the ability to adapt and overcome, a passion for filmmaking and the ingenuity for creating cutting edge products, Vasilatos has had a successful career and sees nothing getting in his way of his ongoing endeavors.

The 25th Anniversary Edition of "Solstice", along with other perks including the award-winning score on CD, DVDs and film poster, are all available on Indiegogo at: https://igg.me/at/solsticebluray/x/13077443#/