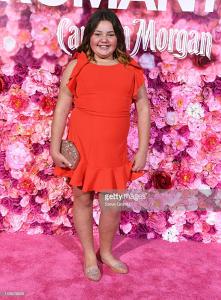 Alex Kis is attached to a US series. Photo: Steve Granitz @ Getty Images

The Aussie favourite joins the previously delayed series after playing the young Rebel Wilson in ‘Isn’t it Romantic.’

Alex Kis is truly a one-of-a-kind talent who is hilarious in every frame in which she appears. She will no doubt deliver a memorable performance only in the way someone of her comedic sensibility can”
— Alex Kis' US manager

LOS ANGELES, CA, USA, October 14, 2019 /EINPresswire.com/ — Young Australian starlet Alex Kis has signed on to the second season of the award-winning Funny or Die series, ‘Unverified,’ where she will play the leading character Charmian Langley across a 13-episode season.

Kis’ representatives expressed excitement over her joining the show, which earlier this year delayed its second season because of scheduling conflicts. Kis’ attachment no doubt will revitalise the fan-favourite mockumentary.

“Alex Kis is truly a one-of-a-kind talent who is hilarious in every frame in which she appears. She will no doubt deliver a memorable performance only in the way someone of her comedic sensibility can,” her LA-based manager stated.

2018 has proved to be an exciting year for the prodigious talent. Familiar to audiences for her appearances in campaigns for Commbank and Arnott’s Shapes, Alex has become a regular on Seven’s ‘The Morning Show’, filmed multiple episodes on ‘News of the Wild,’ and popped up in ABC hit ‘Hardball.’ She was also nominated for ‘Best Actress’ at the St. Kilda Film Festival for her starring role in the film ‘Disco Dykes.’

Alex’s notable appearance in ‘Isn’t it Romantic’ alongside megastars Liam Hemsworth and Rebel Wilson was also marked by a memorable appearance on the red carpet at the star-studded LA premiere. The youngster also blitzed the promotional trail and appeared in trailers that generated millions of views all over the world. ‘Isn’t it Romantic’ has since become Netflix’s 3rd highest rating film amongst 300 million subscribers all over the world, and generated a strong return at the US domestic box office.

Kis is expected to film and take part in promotional activities across the US over a substantial period.