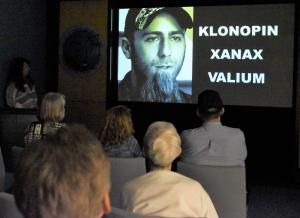 The Truth About Drugs Documentary screenings reveals harrowing facts about popular drugs from those who have abused them.

It was our pleasure to support these important artists. We respect their help to spread the truth about drugs through aesthetic presentations.”
— Julieta Santagostino, President of FDFW Florida chapter

Included in the presentation was a moving story, Lauren: The Mental Effects of Drugs, by Daniel Shippey. This was an uncompromised depiction, with the backdrop of a haunting rock song about someone caught in the grips of narcotics addiction.

Letter to My Mother, by Branislav Janic, was a deeply personal tribute to mothers who also lost the battle with drugs but never lost the love of their children.

Long Road to Recovery was an uplifting tale of an athlete’s life that was once filled with potential, destroyed by drug use, then turned around through his own self-determination as well as help from caring friends and associates. That help was paid forward when the athlete provided aid to others headed down a similar path.

Jessie Posthumus’ cleverly animated White Lines was a nearly confessional look at his falling prey to addiction and the challenges experienced seeking recovery.

Straight Edge: Behind the X may have been the most surprising of the presentations as Jordi Penner explored the Straight Edge Punk movement – a rock and roll style that strictly avoids any drug use by its musicians, or references to them in their songs.

Each of the above filmmakers, and the others not listed, showed exceptional craftsmanship in addition to forwarding vital messages.

“It was our pleasure to support these important artists,” said Julieta Santagostino, President of FDFW Florida chapter. “We respect their help to spread the truth about drugs through aesthetic presentations.”

Ms. Santagostino noted the pervasive nature of pro-drug messages throughout the culture, especially media and movies. That elevates the importance of these counter-messages that remind how harmful drugs are.

Foundation for a Drug-Free World:

The Foundation for a Drug-Free World is a non-profit organization that educates youth and the community on the truth about drugs so they can make the right decision to live drug-free. The Church of Scientology is a sponsor of the program making it possible for the Foundation to provide educational materials at no cost to educators, law enforcement and the community. Humanitarian L. Ron Hubbard, said, “Drugs rob life of the sensations and joys which are the only reasons for living anyhow.”