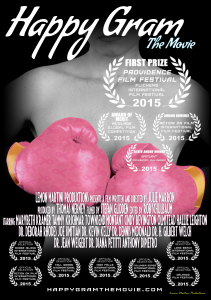 Mammograms miss more than half of invasive cancers in the 40% of women with dense breast tissue; issue explored in feature-length documentary.

Happygram is to mammograms what Blackfish was to SeaWorld.”
— R. Cimino

In March of 2019 the FDA proposed a change to reporting guidelines for the first time in 20 years to include breast density information in mammogram reports that are sent to patients. This information is already collected and provided to the referring physician.

Women advocates had demanded this change for a decade, and were forced to enact state legislation to require “density reporting” while the FDA resisted calls for the change. As a result of this advocacy, 38 states had enacted some type of density notification laws as of 2018, although not all laws required notification to a woman about her own density.

“Dense tissue” refers to having more than 50% non-fatty vs. fatty tissue in the breast. 40% of women who get mammograms have dense breast tissue, which appears white on a mammogram, and can obscure cancers. 70% of invasive cancers occur in women with dense tissue and cancers are often missed by a mammogram for years until they have metastasized.

“Happygram” is the term for the form letter women receive stating that their mammograms are “normal,” when they actually have an invasive cancer that is missed by the mammogram.

The documentary was inspired by the friendship between Director Julie Marron, of Rhode Island, and Hallie Leighton, her close friend who died after mammograms missed her breast cancer until it had metastasized. Ms. Leighton was instrumental in the effort to enact the New York state legislation in 2013 before she passed away. The film has won awards across the country, including First Prize for the Providence Film Festival Award at the prestigious Rhode Island International Film Festival.

“Happygram features several women who were not informed of their breast density, of the increased cancer risk that dense tissue poses, or of the fact that mammograms can, and do, miss cancers when you have dense breasts,” says film director, Marron.

The film explores alternative and adjuvant FDA-approved screening modalities which are more effective at detecting cancer in women with dense tissue. “The film includes interviews with medical experts, politicians, and attorneys advocating for awareness and action on this life-and-death issue,” Marron states. More info: http://www.happygramthemovie.com/about-us-.html

“What stands out in all the stories in this film is that everyone’s cancer was missed for many years by the mammogram, and you just don’t hear about that when breast cancer awareness month rolls around,” Marron said. “We hope to highlight the importance of knowing your breast density, so that no woman ever has to go through what these women did.”

Lemon Martini Productions is a woman-owned documentary production company specializing in social justice topics. Other films include the award-winning documentary, Four Games in Fall (fourgamesinfall.com), which explores topics of science for hire and media manipulation. Man’s Best Fiend explores human/wildlife coexistence through a fifteen-year study of the coyote population on Aquidneck Island and is currently in production.

Introduction to Happygram Documentary: Mammograms Ineffective for Detecting Breast Cancer for the 40% of Women With Dense Breast Tissue