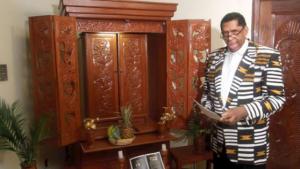 Anthony Amp Elmore World most prolific Black Buddhist Lecturer has uploaded over 600 You Tube Videos. Has published more on Black Buddhist History than anyone in the world. 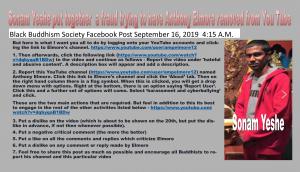 Facebook Group Black Buddhist Society member Asian Indian member Sonam Yeshe used his computer skills to commit Fraud. He outlined a scheme they could use to try to get Elmore kicked off You Tube. 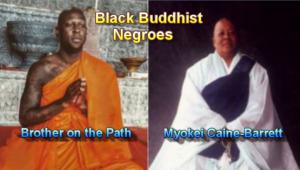 If you take dung and then carve this into the image of a woman, a heavenly goddess, or a Buddha, when it is burned, it would still give off no other fragrance but the stink of dung”
— Nichiren Shonin 13th Century Japanese Black Buddhist Sage

MEMPHIS, TN, UNITED STATES, September 20, 2019 /EINPresswire.com/ — Anthony “Amp” Elmore a 5 time World Karate/Kickboxing Champion, Community activist and a 50 year practicing Buddhist tells the story of the Black Buddhist Society Un-Enlighten Buddhist who practice Black on Black Racism. Elmore explains that this story is like the outdated 1970’s Chinese Kung-fu movies whereas the story includes a Black man who calls himself “Brother on the Path” leaves the Ghetto world of America and becomes a Buddhist Monk who roams the mountains of Tibet and Cambodia unclothed with only a robe and a bald head.

There is also the story of a bald headed Buddhist Black woman by name of Myokei Shonin. Myokei Caine-Barrett is the first woman of African-Japanese descent, and the only Western woman, to be ordained as a priest in the Nichiren Order. She was featured in the CNN premier “Black in America” in a story called “Finding refuge in Buddhism.”

Elmore was looking to join the Nichiren Shu sect under not Bishop Myokei Caine-Barrett whereas he attended meetings in Memphis. On Thanksgiving day 2013 Elmore asked Myokei Shonin and leaders of Nichiren Shu via a web posting to define their policy regarding Black people in that Elmore wanted to call the group "Memphis Black Buddhist." Myokei Cain-Barrett not only objected to the term Black, Elmore was informed that he was no longer welcome at Nichiren Shu meetings. In 2013 America was experiencing a Black President and the Birth of "Black Lives Matter" Myokei Shonin a Black Buddhist Priest objecting to the term Black was certainly not Buddhist wisdom, but a "Negro Mentality."

Nichiren Shonin the 13th Century Japanese Black Buddhist Sage wrote in his writings called the Gosho or Nichiren Buddhist writings called “Roots of Good Fortune” The Gosho Reads: “Suppose one dries dung, breaks it up, passes it through a sieve, and forms it to resemble a block of sandalwood. Even if one were to then carve this into the image of a woman, a heavenly goddess, or a Buddha, when it is burned, it would still give off no other fragrance but the stink of dung.”

Soul Singer James Brown Brown had a song called "open up the door its too Funky in here." Elmore an Independent Black Buddhist had an association with the "Facebook Black Buddhist Society." Without notice the group influenced by Myokei Shonin shut the door on Elmore. With no warning the group shut Elmore out of the group. In the words of the Black Community the group "Got Funky with Elmore.

No matter how the Facebook Black Buddhism Society will try to twist or shape facts or give a reason why the group brazenly expelled Anthony “Amp” Elmore from their closed group it gives off no fragrance but “The Stink of dung.”
Anthony “Amp” who practice the Buddhist teachings of the Lotus Sutra explains that it is written that the Lotus Sutra is “Like a “good Physician that can change poison into medicine.”
Elmore took the Facebook Black Buddhist Society obstacle and turned it into in opportunity to write, produce, direct, edit and narrate a video titled “Black Buddhist Negroes.” Elmore’s lecture was inspired by the Father of African American history Dr. Carter G. Woodson’s 1933 book “The Mis-education of the Negro,” Dr. Woodson writes in the book that Blacks of his day were being “Culturally Indoctrinated” rather than educated.

Elmore notes that at the time of the Afro-Greek writer homer India was known as “Eastern Ethiopia.” Archaeology, anthropology, Genetic Science, Literary Science and Linguistic all prove not only that the Buddha was Black, also the four Black Great Civilizations practice Buddhism, Indus Valley, Nubia, Egyptian and Ethiopians practiced Buddhism.
Anthony “Amp” Elmore is the lecturer who speaks and lectures about Buddhism in a Black language. Elmore explains if I write about Buddhist there would be little interest in the Black Community. Elmore notes because I am writing about “Black Buddhist Negroes” there is a tremendous interest. Black people left Negroes back in the early 1970’s. There are still many Negroes around. Elmore explains that most Black Buddhist who are trained in Buddhism by Asians and Whites are the epitome of a Negro Mentality in that they are "Culturally Indoctrinate rather than being educated.

Elmore explains that "Black Buddhist Negroes are not only "Unenlightened" they are also some " Scary Negroes." Elmore notes we hold truths to be "Self-evident." Elmore notes that in our entire world there is not a Black man who is honored in the Black community as a Buddhist. Elmore notes we are going to raise great Buddhist leaders.

Elmore explains we got Asian Buddhist Racist, White Racist and Black Buddhist Negroes to contend with. There is a Bald Head Myokei shonin a fraud representing Black Buddhist. There is brother on the path on a mountain in Thailand. There is a Sonam Yeshe all the way India working against Black causes. Above is a conspiratorial document whereas Brother on the Path, Myokei Shonin and an Indian running a scheme to have Elmore removed from Facebook.