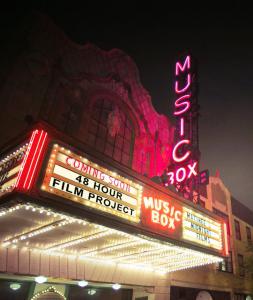 Along with awards to be presented to this year's winning films, Cinespace Chicago Film Studios (www.chicagofilmstudios.com) will also be honored for their continued support of Chicago's indie film community, as well as their role in helping revitalize the local film industry economy,

"The Mirkopoulos Family and Studio President Alex Pissios have been so instrumental in helping support our film festival, and we want to extend our gratitude to them for the countless jobs they have also helped create here while attracting projects to Chicago" said Jerry Vasilatos, City Producer of the Chicago 48 Hour Film Project. "As they've given the same level of attention in helping us promote our emerging indie filmmakers, we felt it was fitting to showcase them along with the films selected by our judges to also be honored as the Best of Chicago".

The 48 Hour Film Project screenings premiere the work of 49 local Chicago filmmaking teams that drew a genre from a hat on Friday, August 23rd. They were then given a character, prop and line dialogue to include in their films. On Sunday August 25th, the filmmakers raced in a wild dash to the drop off event at Magnanimous Media (www.magnanimousrentals.com), where they turned in their films by the 48 hour deadline.

All films are eligible for audience awards, and the 45 that met the 48 hour deadline are judged for various awards by local filmmaking professionals. The entry declared to be the overall "Best Film" of Chicago will win a $1,000 Cash Prize courtesy of sponsors Cinespace Chicago Film Studios and the Ziliak Law Group (www.ziliak.com). Chicago's winner will then be sent to the international 48HFP competition, Filmapalooza, to be screened and judged with over 100 city winners from around the globe. From there, 12 films will be chosen to screen in the Short Film Corner at the Cannes International Film Festival like Chicago 2018 best film winner "Knockout” by Alley Cake Films and director Erik Scanlon. This marked the SECOND TIME IN A ROW a Chicago Team was selected to screen at the world-renowned film festival, showing that with determination and talent, teams can truly go the distance.

All premiere screenings, as well as the "Best of Chicago" Awards will be preceded by red carpet step up photo opps, where attendees can get pictures with their favorite filmmakers.